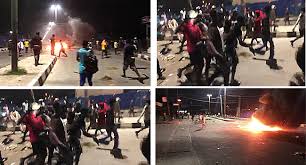 Popular comedian Debo Adebayo, also known as Mr Macaroni, and nine others have been arrested at the Lekki tollgate as they joined other protesters on Saturday to express their dissatisfaction with the decision of the Lagos State Judicial Panel of Inquiry allowing the Lekki Concession Company to reopen the toll plaza on Saturday.

Their arrest came as #DefendLagos group announced the suspension of its Lekki counter protest also planned for Saturday at the same venue.

Earlier in the week, some youths had taken to Twitter to call for a protest against the reopening of the Lekki tollgate.

Adebayo was arrested with nine other protesters after the police had told him “we don’t want you here”.

In a live Instagram post before his phone and those of other arrested protesters were seized, the comedian lamented that “Lekki is  under military rule.”

He said, “How did you think the reopening of tollgate is the next line of action? If you didn’t do that today, we won’t have a right to be here.

“It is a disrespect to say that you want to reopen at this tollgate. Are you spitting on the graves of the dead?

One of the coordinators of #OccupyLekkiTollgate, Kunle Ajayi, confirmed the arrest of 10 protesters at the tollgate on Saturday.

“Police have just arrested 10 protesters – Four ladies and six guys. They were beaten mercilessly and injured,” he said.

Meanwhile, Alabi Oladimeji, convener of #DefendLagos, has withdrawn from the proposed Lekki protest.

The group was formed as a counter against #OccupyLekkiTollGate rally on Saturday.

In a virtual press conference, Oladimeji said his group withdrew from the counter protest owing to assurances by the government that no protest will take place at the tollgate.

He said his group will embark on a huge protest if the government allows the #OccupyLekkiTollgate group to hold their protest.

“No protest from #DefendLagos on Saturday. We are simultaneously respecting the state and federal governments,” Oladimeji said.

“I am proud to announce that for the meantime, we will be pending this protest due to the law of the federal and state governments. We are law-abiding and good citizens, definitely, we should not be the ones seen disobeying any law.

“In respect of the President, Muhammadu Buhari, and Lagos Governor Babajide Sanwo-Olu. I am now announcing that anyone involved in #DefendLagos initiated by me should with immediate effect pend the protest. We are not going to hold any protest again on Saturday.

“If Lagos and FG fail us, we will come out huge and protest on Monday. It is depressing news for me because we have invested personal resources to produce banners, posters among others on this. But this is not an avenue for us to make money like those in the Occupy Lagos.

Operations at the toll plaza have been suspended since October 2020 following the shooting at the tollgate. Soldiers shot at activists who had gathered there to demonstrate against police brutality under the #EndSARS campaign.

On February 6, five of the nine-member panel voted to return the control of the tollgate to the Lekki Concession Company (LCC), saying a forensic analysis on the venue of the shooting had been carried out, and there was no need to keep the place closed to business operations.

The panel’s decision generated reactions on social media — with many criticising the move.