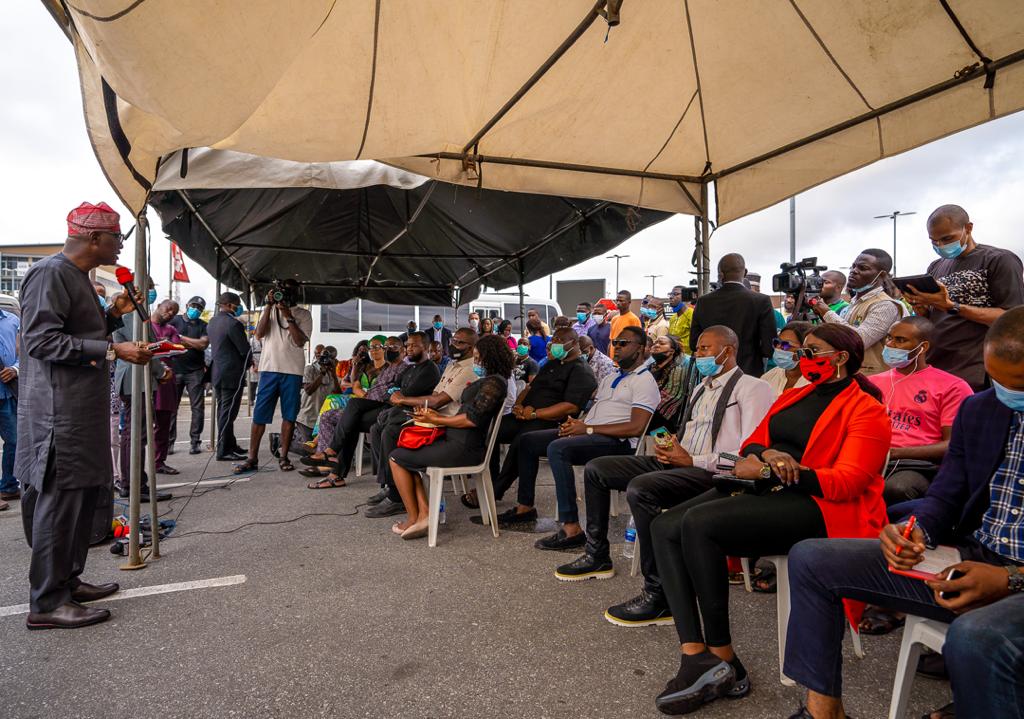 Lagos State Governor, Mr Babajide Sanwo-Olu, has promised to assist tenants and shop owners who suffered huge losses in the recent looting and burning of the Circle Mall by hoodlums in Lekki in the aftermath of the #EndSARS protest.

The governor said this during a condolence visit and meeting with the tenants and shop owners at the mall, offering to give them a tax break and some financial assistance, according to a statement by Sanwo-Olu’s Chief Press Secretary, Gboyega Akosile.

It would be recalled that some hoodlums went on the rampage on Wednesday October 21, after the EndSARS protests and looted property worth billions of naira at the Circle Mall and set parts of the building ablaze.

Speaking on his administration’s readiness to assist those affected by destruction at the mall, Governor Sanwo-Olu said the state government would not leave the people to bear the pains alone, noting that government would assist them to return to their business.

The governor said the state government would give all business owners in the burnt Circle Mall tax break of PAYE and appealed to the Federal Government to ensure that they get tax relief from the Federal Internal Revenue Service (FIRS).

Governor Sanwo-Olu said the state government would give victims of the Circle Mall financial support, which would be in form of grant or loans to cushion the effect of the looting and destruction of their respective shops and stores.

Sanwo-Olu said the grant support would be a non-refundable financial support to the victims.

He said the affected businesses were not expected to pay back while the lending support would be in form of a loan, adding that he was already discussing with some financial institutions to assist people with zero interest loans.

Sanwo-Olu also asked the shop owners to reach out to the Lagos State Employment Trust Fund (LSETF) and urged them to make use of the opportunities being provided by the agency in assisting people in business, especially small-scale businesses.

The governor further implored people on reorientation of value system and civil responsibility for everybody to be agent of positive change in their community and anywhere they found themselves.

Reiterating his administration’s commitment to security of lives and property in the state, Sanwo-Olu said that Lagos State would no longer tolerate hoodlums looting and destroying government and private businesses and properties.

He said though Lagos State Government could not stop people from coming into the state, the governor warned people with criminal intentions to go elsewhere before being smoked out by the government.

The governor said his government was ready to encourage people who are in Lagos for business and would go extra mile to protect businesses in the state.

Speaking earlier, the tenants at Circle Mall thanked Governor Sanwo-Olu for showing empathy in the face of daunting challenges.

They asked him to assist them financially so as to get back on their feet.

They also appealed to Lagos State Government to strengthen security around the Circle Mall to prevent future occurrence of the two attacks they suffered in the last 13 months.