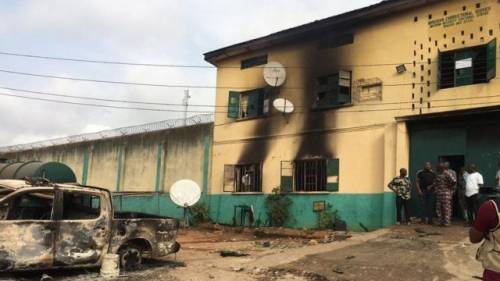 Minister of Interior, Mr Rauf Aregbesola, has said the fugitives who escaped from the custodial centre in Owerri, the Imo State capital, will be granted amnesty if they return voluntarily.

He stated this just as gunmen have set ablaze another police station in Imo State, the second time in two days.

Aregbesola spoke during the inspection of the custodial centre on Tuesday after it was attacked by unknown gunmen on Monday.

Over 1,880 inmates were said to have escaped while 36 stayed back during the attack.

The minister said, “Unlawful escape from custody is a crime but the government in its magnanimity will grant amnesty to prisoners who willfully return

“They will no longer be charged with an unlawful escape but only for the initial crimes that took them to prison. So we urge all escapees to return before they are caught on the run.”

The minister also described the Monday jailbreak at Owerri Correctional Centre and the burning of the Imo State Police Command headquarters as the worst in the recent history of the country.

Aregbesola, who said that the attackers operated as terrorists, ordered the relocation of the Owerri Recreational Club and other structures posing as a security threat to the premises of the centre.

Aregbesola vowed that those who perpetrated the attack would be apprehended and prosecuted.

Meanwhile, gunmen went on the rampage on Tuesday afternoon as they set ablaze another police station in Imo State, the second time in two days.

The attack on the police station came hours after Vice-President Yemi Osinbajo visited the state for an assessment of the damage done during a previous attack.

The police command headquarters and a correctional service centre in Owerri, Imo state capital, were attacked in the early hours of Monday.

It was learnt that police officers on duty took off when the station was invaded by the gunmen on Tuesday.

The gunmen were also said to have freed the detained persons at the police station.

He, however, added that no death was recorded during the invasion.

“Yes, I can confirm to you that the police facility was attacked today by bandits. No casualty on the part of police, no loss of arms, but three vehicles were burnt in the process,” he said.

Some inmates were freed while buildings and vehicles were razed when the Imo State police headquarters was invaded.

The Nigeria Correctional Service also said over 1,800 inmates escaped from custody, while the police accused members of the proscribed Indigenous People of Biafra of being behind the attacks.

Related Topics:AregbesolaImo jailbreak
Up Next