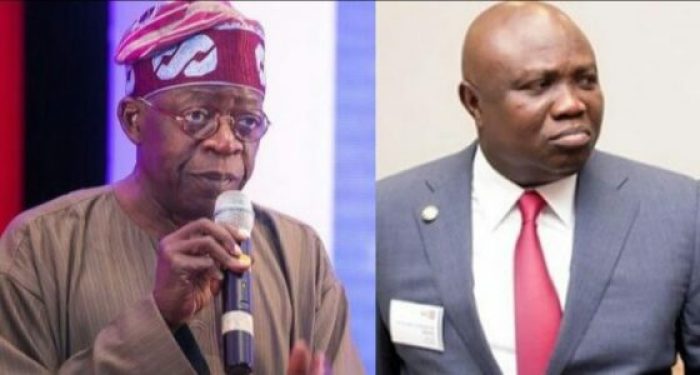 National Leader of the All Progressives Congress (APC), Bola Tinubu, says Lagos State was heading in the “wrong direction” when Akinwunmi Ambode was governor.

He however praised the incumbent governor of Lagos, Babajide Sanwo-Olu, as having “turned around” the fortunes of the state.

Tinubu spoke at the inauguration of the Agege Pen-Cinema flyover on Friday.

He said, “Sometimes in 2017-2018, the ship of this state seemed to have headed in a very wrong direction. Ever since Babajide became the captain of the ship of our state, he has turned it round to the right direction of progress, development and good leadership quality.”

Ambode was governor of Lagos between 2015 and 2019. He failed in his bid for a second term as he lost the primary election to the incumbent governor.

Tinubu commended the strides of Sanwo-Olu and his deputy, Femi Hamzat, noting that they were overseeing an administration “determined” to rebuild Lagos.

He said, “Both of you (Sanwo-Olu and Hamzat) and the entire cabinet have demonstrated unequal determination to redevelop, rebuild for the people of Lagos. You have made us see a fine and determined government for the progress and quality of life of our people.”

Tinubu also advised youths to shy away from thuggery, adding that the mindset of destruction would not let them attain their goals.

He said the government was ready to help the youth get the right education, urging them to give peace a chance in the state.

“Don’t copy vagabonds and those who are into thuggery. There is no development if there is no peace. We must encourage peace. The government will ensure that you get the right education. Education is an investment in your future.

“Destruction and disruption will not help you to reach the destination you desire to reach. We will support your aspirations but help the state, ensure peace in our state and country.”

The former Lagos governor commended the state government for carrying on with its developmental projects despite the chaos and economic disruption witnessed during the #Endsars protests.

“Despite the turbulence and crisis of the virus, the lockdown, you are able to continue to deliver this state. You have shown great determination as a government,” he said.