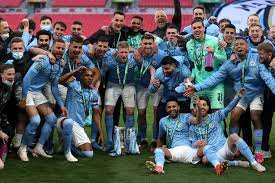 Leeds claimed another deserved point against one of the Premier League’s ‘big six’ as they drew 0-0 with Manchester United at Elland Road.

“Today we just didn’t have the moment, take [our chances] when we had them,” Sky Sport quoted Solskjaer as saying, adding, “A draw is disappointing because we wanted to put pressure on [Manchester] City, but we couldn’t score.”

Solskjaer’s side, 10 points behind City with five games to play, extended their unbeaten Premier League away run to 24 matches and are now undefeated in their last 13.

The Norwegian was delighted with his players’ physical effort against a Leeds side renowned for their endurance.

“I’ve not seen many teams in the second half dominate as much as we did against Leeds, because they are so fit and strong,” Solskjaer said.

Leeds have not beaten their arch rivals in the top flight since 2002 when Solskjaer was a Manchester United player, but boss Marcelo Bielsa was equally as pleased with his players’ display.

“It was a very demanding game for us,” Bielsa said. “For the game not to become unbalanced, the team made a massive effort. 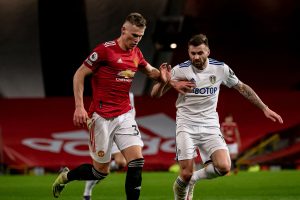 Just over a week on from disappointment in the FA Cup semi-final on this ground, Manchester City have turned Wembley their shade of blue.

Aymeric Laporte’s 82nd-minute header is the winner at Wembley Stadium, as Manchester City defeat Tottenham Hotspur to pick up the first major trophy of the run-in.

To Man City, the treble is on!

City had been headed for a nightmare scenario, with 30 minutes of extra-time the last thing they would have wanted just three days before the first leg of their Champions League semi-final against Paris Saint-Germain.

But thanks to Laporte’s late intervention, they now have the first of potentially three trophies in the bag as the season enters its final furlong.

Spurs, though, were right to feel a little hard done by after Laporte was twice caught out by the pace of Lucas Moura during the first half, with his only way of stopping the Brazil international to pull him back.

Both offences would normally have warranted yellow cards, and yet only the second was punished with a booking by referee Paul Tierney.

Whether he would have made the second challenge if he had been given a yellow card the first time is a question that will go unanswered, but that is unlikely to appease fans from north London.

We will also never know whether Laporte would have started here had John Stones not been sent off against Aston Villa on Wednesday.

The England international, therefore, missed out through suspension, allowing Laporte to step up after a season in which he has been forced to watch on from the sidelines in a number of matches following Stones’ resugence and the arrival of Ruben Dias.

His pair of crude pull-backs on Lucas showed why he is no longer the mainstay he once was under Guardiola.

That said, it will be Laporte who goes down in the history books as the player who ensured City’s crazy love affair with the Carabao Cup goes on.

In winning the trophy for the fourth successive season, they have now matched the record set by Liverpool in the 1980s for consecutvie triumphes, while Guardiola is now the joint-most successful manager in the competition’s history.

City last lost a Carabao Cup tie in October 2016 while captain Fernandinho – who lifted the trophy alongside fellow stalwart Sergio Aguero – has now won the competition a record six times.

Chukwueze gets assist as Villarreal lose 1-2 to Barcelona

The Yellow Submarine headed into the encounter after losing against Deportivo Alaves and aimed to return to winning ways but failed to get the better of the Blaugrana.

Chukwueze made his 12th league start of the season in the encounter and delivered an impressive performance.

The Nigerian international helped Unai Emery’s side to hit the ground running in the encounter, scoring as early as the 26th minute.

The fleet-footed winger opened the scoring for the Yellow Submarine in a spectacular manner, dribbling past his markers before firing into the back of the net.

The Yellow Submarine, however, failed to build on the impressive start, as they allowed Barca to come back into the game.

Antoine Griezmann started Barcelona’s fight-back when he levelled proceedings in the 28th minute after receiving a timely assist from Oscar Mingueza.

The 30-year-old France international then completed his brace in the 35th minute, firing home his effort after finding himself in a one-on-one situation with goalkeeper Sergio Asenjo.

After the restart of the second half, Villarreal pushed for a possible equalizer and Chukwueze has several attempts on goal.

In the 65th minute, however, they suffered a big blow when they were reduced to 10 men after Manuel Trigueros was shown a straight red card.

Moments before the end of the game, the Yellow Submarine thought they got a penalty after Francis Coquelin’s effort was blocked in the area, with claims of handball, but after the Video Assistant Referee reviewed the situation, a spot-kick was not awarded. 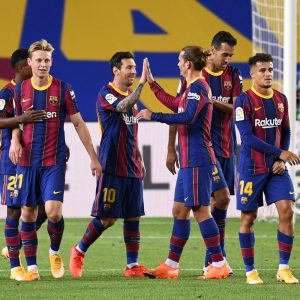 Why I want to buy Arsenal – Spotify owner, Daniel Ek