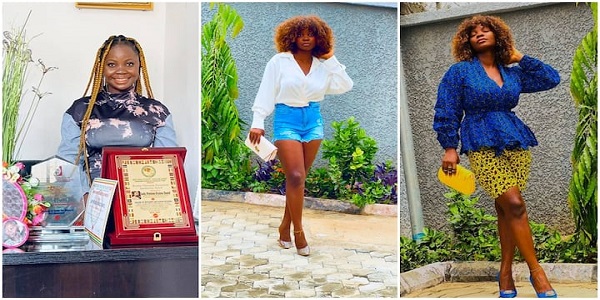 Until her arrest, Imu Ovaioza Yunusa, who is the founder and CEO of Ovaioza Farm Produce Storage Business (OFPSB) was accused of being a ‘fake entrepreneur’ who defrauded unsuspecting Nigerians of billions of naira.

During the week, she was apprehended by operatives of the Force Criminal Investigation Department (FCID), Abuja.

Her company claims to engage in processing, storage, distribution and retailing of farm produce such as garri and plantain. Ovaioza also co-owns Ovaioza Skills Acquisition Center (OSAC) and Relax and Chill.

The lady who is a verified Facebook influencer with over 140,000 followers allegedly scammed her people to the tune of N3 billion. She was alleged to have bought multiple houses.

Just like other Ponzi gurus in Nigeria, Ovaioza whose name never resonated before, suddenly had sudden lifestyle upgrade, lived lavishly in expensive apartments, and dressed in the best designer clothes.

She was given the nickname ‘Facebook Yahoo Girl’ on social media platforms after several billions of naira in the investment scheme went down the drain.

The entrepreneur allegedly hoodwinked millions of Nigerians to invest in her farm storage business.

Ovaioza was constantly on her social media pages – especially Facebook – disguising her real personality, preaching about love, kindness and other moral values. In one of her many posts, she talked about being a fan of love and kindness. “I am very big on love, loyalty, trust, and kindness,” she posted.

She started off disguising as a philanthropist, doing giveaways on social media. Then in 2017, Ovaioza released a gospel song titled ‘Holy Are You Lord’ under the stage name ‘Ovai4Jesus’.

Her brief profile states she was born on 30 December, 1993, and started her academic journey at the College of Arabic and Islamic Studies, Okene, Kogi State. She furthered her education at the School of Nursing and Midwifery, Nasarawa State, Bayero University, Kano, where she bagged a Bachelor’s Degree in Biology Education.

Ovaioza offered investors a huge return on investment, but in the past months, she defaulted, neither paying partners their profits nor returning their capital. She reportedly refused to answer enquiries, and this led to people reporting her to security operatives.

Responding, Ovaioza denied on allegations on her official Facebook page that she defrauded numerous investors to the tune of several billions of naira. She claimed that issues with the Securities and Exchange Commission (SEC) were affecting her business and her account.

“My lawyer duly reached out to SEC and reported back to me (I was not the one who went to SEC) that SEC said they don’t regulate buying and selling. I must also admit that maybe we should have made a written application requesting for SEC to register my business, but unfortunately, we did not do so,” the statement read in part.

She claimed that ignorance as a trader made her not seek out SEC previously.

“I must admit my ignorance as to the extent of corporate compliance that is necessary for my buying and selling business, especially as the business grew, owing to funds sought from the public,” she said.

“Again, I am only a trader, versed in the craft of buying and selling, but a lay man in the legal expectations and commitment from such business.

“However, when it was brought to my notice my business requires registration with Securities and Exchange Commission (SEC), I asked my lawyer to reach out to SEC to ensure the needful was done. I did this to ensure that my interest and the collective interest of my partners are protected by law.”

Ovaioza also runs OFPSB, a food storage business, through which she crowdfunds to buy foodstuff during the harvest season, stores it and sells it during the planting season. According to her, partners’ profits are undefined and not fixed.

While her investment ‘business was still booming’, she ‘hired’ several social media influencers and content creators to help promote her ‘brand and business’.

In January, House of Representatives had warned that Ponzi scheme promoters risk jail term, the EFCC also warned Nigerians to steer clear of suspicious ‘investment opportunities’ that sound too good to be true.

Related Topics:OvaiozaPonzi scheme
Up Next