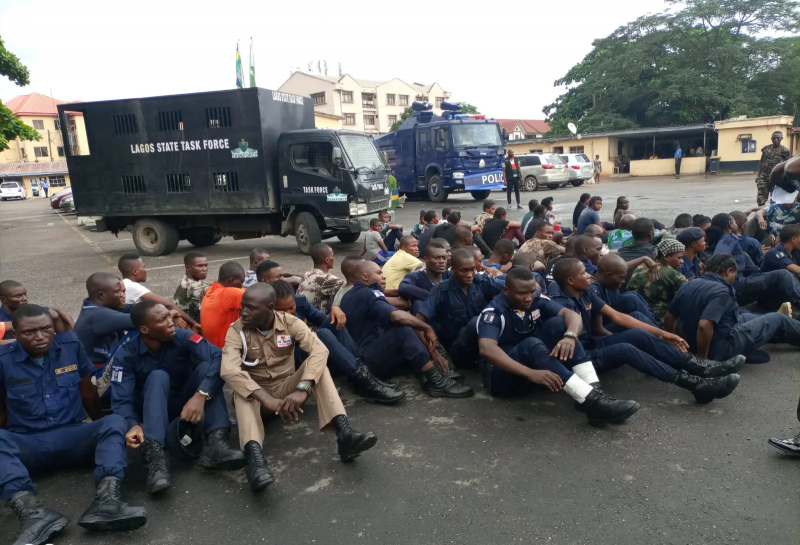 The Lagos State Police Command has uncovered a training camp used by an illegal Military outfit known as the Nigerian Merchant Navy, in the Ogudu Stanfield area of the State.

Commanding Officer of the unit,  Sunday Dakare, 47, was arrested alongside  107 youths: both males and females between ages 19 and 47, who were undergoing training.

Parading the suspects who were clad in what looked like the Nigerian Navy camouflage, at the headquarters of the Lagos State Police Command, Ikeja, yesterday, the command boss, Hakeem Odumosu,  said that the command embarked on intensive surveillance of the camp and its activities, following what he described as credible actionable intelligence on the illegal activities of the outfit, before it carried out a well-coordinated overt operation at the training camp, at the early hours of yesterday.

Odumosu explained that  “During the raid which was coordinated by the Operations Department of the Command, the following items were recovered: several military accoutrements including, camouflage, badges of ranks, flag, signboard, ID cards.

Other items recovered include recruitment letters, promotion letters, a portrait of the Commanding Officer, two motorcycles, one plasma TV, three cutlasses, criminal charms and other items.

“In the course of interrogation, it was discovered that the Nigerian Merchant Navy also called the COASTAL DEFENCE FORCE has been operating illegally since 2005”.

He recalled that the Nigerian Merchant Navy has since been outlawed by the Federal Government and therefore, said it was illegal for anyone to operate such a military outfit and give military training to unsuspecting young Nigerians.

He said, “ this trend portends danger for our Nation and a threat to peace and security. It, therefore, behoves us as a law enforcement agency to enforce such law banning activities of the illegal military outfit.

I want to use this medium to warn other individuals or groups still operating such illegal outfits in any part of the State to close it forthwith. Anyone nursing the plan to operate such an outlawed security outfit is advised in his own interest to rescind the decision or face the full wrath of the law. The police will not hesitate to clamp down on them and their operators and bring them to book”.

He, therefore, urged members of the public with useful information on anyone operating a clandestine military outfit or training camp to inform the police for urgent necessary action, adding that the suspects would be charged to court.

However, the suspects who seemed oblivious of the offence showed no remorse, Rather, they maintained that moves were on to legalise the outfit, by the Federal Government,  just like the  Nigeria Security and Civil Defence Corps.

The Commanding Officer, Dakare, expressed shock at Police action, questioning the rationale behind it.

He said, ” I don’t know why they will arrest us. Efforts are on to legalise the Nigeria Merchant Navy as obtained elsewhere in the world.  Besides, the uniform we are wearing is not Military camouflage, it is not Navy best, it is Marine Navy and we are not operating yet.  Other countries have Coast guards and that is our role.

We are not being paid, we are only undergoing training while we await Federal Government’s consent”.

On her part, a lady who simply gave her name as Sultan,   said “We enrolled online. What we are doing is to seek our rights. The work of the Nigerian Merchant Navy is to secure the sea, tackle sea robbery and fight piracy.

The bill is before the National Assembly, it has passed the second reading and we are waiting for the third reading. Buhari is aware of this, the House of Reps didn’t kick against it when it was presented for reading.

I was surprised when the Police came to raid our camp. I don’t want to believe we were arrested because of the outfit, it could be because the land we are using as camp belongs to a foreigner.

The things the Police displayed as exhibits are not criminal ”.

Related Topics:FeaturedillegalLagosmilitarypolicetraining camp
Up Next