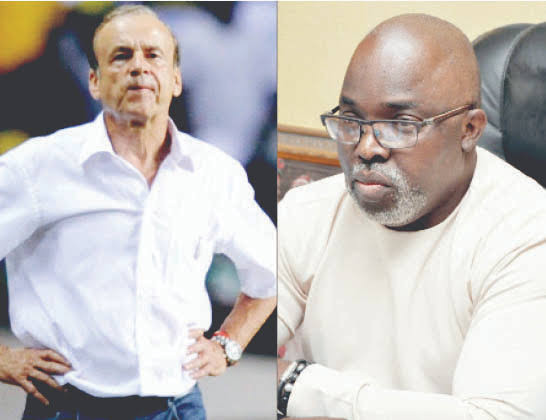 The Nigeria Football Federation says there is no immediate plan to sack Coach Gernot Rohr despite the poor outings of the Super Eagles in recent matches.

Former Nigeria international Yakubu Aiyegbeni has labeled Gernot Rohr as one of the ‘worst coaches’ in Super Eagles history and questioned some of the credentials of the current crop of players.

In the recent Africa Cup of Nations’ qualifiers, Nigeria squandered a four-goal lead in a 4-4 draw at home to Sierra Leone and later played a 0-0 stalemate in the reverse fixture away to the Leone Stars in Freetown.

Nigeria still tops Group L despite the results in the qualification for Cameroon 2022.

NFF President, Amaju Pinnick, said notwithstanding the pressure on the football house, Rohr would not be sacked.

His reaction followed Sports Minister Sunday Dare’s social media comment questioning the ‘suitability and competence’ of the coach on the back of the 0-0 draw in the reverse fixture.

“Nobody is happy about what happened against Sierra Leone in both matches,” Pinnick told BBC Sport Africa

“But it is not enough to sack the coach because his team is still top of the Nations Cup group after four matches.

“His statistics speak volume for him. So, on what indexes do we want to sack him considering the contract recently signed by both parties?

“No matter how emotional and disappointed the fans are, there’s no basis to sack him now and he deserves to keep his job.”

Rohr, 67, was appointed coach of the three-time African champions in August 2016 and led them to a third place finish at the 2019 African Cup of Nations – after the team had missed back to back tournaments in 2015 and 2017.

But he has faced criticism over tactics and choice of players from the local media, former players and disappointed fans.

However, Pinnick backed the German to lead the West African nation to the delayed continental showpiece event in 2022 and the World Cup in Qatar same year, as agreed in his recently extended two-year contract.

“When you look at his performance, where he has won 29 matches, drew 14 and lost 10, you can say that is enough to back him,” said Pinnick.

“Yes, the performance in the last two games has not gone down well with some people, but we need to be professional, honest and respectful in how we analyse things.”

But Aiyegbeni believes Rohr is unfit for the hot-seat and has backed the call to relinquish him of the job.

He said, “The coach is not good enough, let him go,” said Aiyegbeni on Lagos Talks as reported by Goal.com.

He added, “Some of the boys are not good enough, I don’t know where they are bringing them from. Who is inviting these players?”

The former Blackburn Rovers, Everton, Middlesbrough, Leicester City and Portsmouth forward also said, “Our football is getting worse every day. When I was there, people criticised us, but we’re way better than these ones.

Related Topics:PinnickRohrSuper Eagles
Up Next