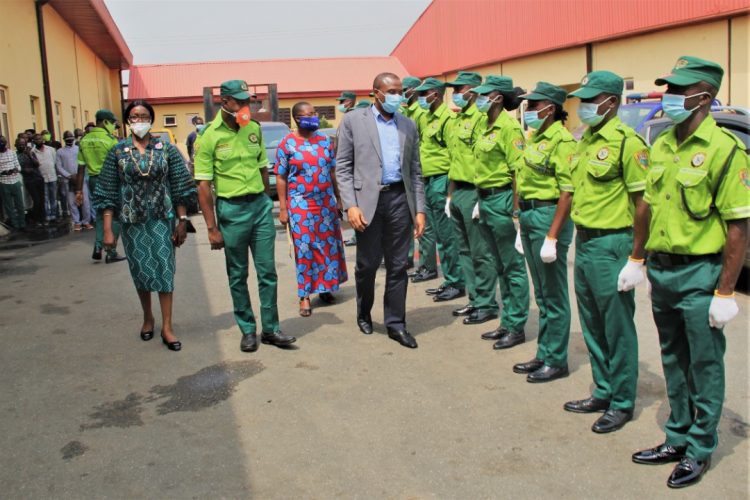 The Lagos State Commissioner for the Environment and Water Resources, Mr. Tunji Bello, has urged operatives of the Lagos Environmental Sanitation Corps (LAGESC) to step up their performance in the discharge of their official duties especially in the areas of indiscriminate dumping of refuse and dislodging of recalcitrant street traders on the major highways in the State.

He stated this at the corps headquarters, Safety Arena, Bolade-Oshodi, during a working visit to the agency,

“There is a need for the LAGESC operatives to ensure that all the major roads in the State are rid of all environmental nuisances and infractions in order to ensure total cleanliness of the environment,” he said.

Bello noted with dismay the high level of indiscriminate dumping of refuses and rising numbers of hawkers on our major highways, such as some major streets on Victoria Island and the Mainland, directing LAGESC officers to move out to all these major highways to ensure total sanity, nothing that these roads are not meant for trading, but rather, people should go into state-approved markets to engage in legalised trading activities.

Whilst also maintaining that the State government will continue to provide necessary assistance and support, such as strengthening the workforce,  insurance policies, additional operational vehicles amongst others towards effective and efficient discharge of their duties.

The commissioner however admonished the operatives to desist from any form of unhealthy practises, warning that any of the officer found wanting will be dealt with accordingly.

Earlier in her welcome address, the Corps Marshal, CP Akinpelu Gbemisola (retd.), said, “This visit will no doubt help to boost the morale of the personnel, provide them with encouragement, stimulus and make them feel that they are an integral part of this present administration. And most importantly, to intimate them that so much is expected of them for the success of this administration.”

While commenting on the agency’s achievement since assumption of office, she said that it had embarked on “various reorganization and restructuring strategies towards raising the bar of the organization towards improved, effective and efficient monitoring of the state environment in line with global best practices of enforcement technique. One of such is the expansion of the operational divisions from ten (10) to twenty-one (21) for proactive and reactive efficiencies.”

The corps marshal assured the commissioner of the unflinching support and commitment of the management and other member of staff of the agency to zero tolerance to indiscipline amongst the officers as they represent the image of the state.

In recognition for outstanding performance, dedication and positive attitude on the job throughout the past years, the management presented five of its officers the award of excellence for their outstanding contribution.

Akinpelu said the award would make them feel valued as well as encourage others.

She gave the names of the awardees as Yekini Nurudeen, Oladejo Abiodun, Adio Akeem, Ganiyu Kazeem and Alabi Mariam Abiodun.

Related Topics:LAGESCTunji Bello
Up Next