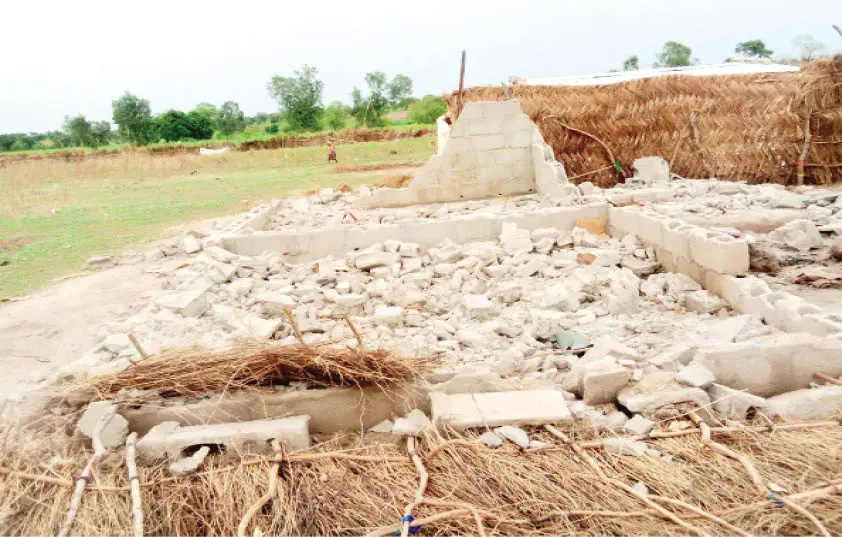 House where rooms collapsed and killed two boys in Mutumbiyu town, Gassol Local Government Area of Taraba during the windstorm

Abdulhakim Hashim recently had a discussion with his three little children on how they will celebrate the Eid-el Fitr. Little did he know that two out of his three children would not be alive to witness the Sallah celebration.

He told Daily Trust Saturday in front of his house, which was destroyed by heavy windstorm, that he never knew that calamity was going to strike few minutes later.

Hashim said he was talking with his children when the rain started at about 8.40pm that fateful Saturday. And few minutes later, heavy windstorm accompanied the rainfall.

“I just heard a loud sound, then there was darkness around us in the room. All of us – my three children; a boy Rabiu,7, and two girls, Sharbila 3, and Jummai 5, were in the room when it collapsed and buried us,” he said.

He said his wife, who was in another room, raised an alarm when the room collapsed and neighbours rushed in and removed him and the three children from the rumbles.

“I was brought out from the collapsed building alive but sadly, the two girls were dead and the boy Rabiu was alive with a fracture on his left hand,” Saleem said. 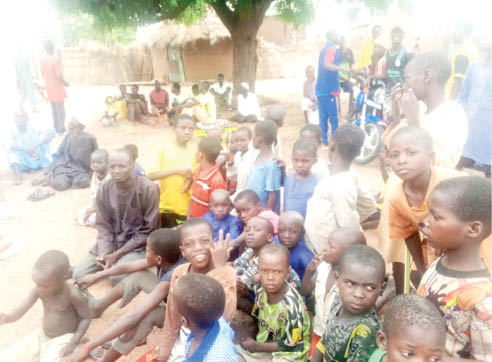 Some of the victims of the windstorm

He said Rabiu was taken to Referral Hospital Mutumbiyu and at the hospital, other victims who sustained injuries during the windstorm were also brought from different areas of the town

“We’ve never experienced such devastating wind in this town, even though in recent years every first rain of the year is usually accompanied by windstorm,” he said.

From Hashim’s house to a primary school along Garin Magaji ward also in Mutumbiyu, lots of houses were affected by the windstorm and apart from blown off roofs, several rooms and walls collapsed.

Owner of the house and father of two boys, Yakubu Inuwa, told Daily Trust Saturday that the impact of the collapsed building destroyed everything in the room and also killed the two boys – Musa, 4, and Chindo, 5, who were sleeping on the same bed.

He said the rainfall was not heavy when it started but few minute later, a powerful wind came and blew everything away.

“The room where my two children were sleeping just collapsed soon after the windstorm started,” he had said.

He stated that neighbours rushed into his house when they heard the sound of the collapsed building. “The boys were brought out alive but seriously injured with several fractures. They died on the way to the hospital.”

A resident of Garin Magaji ward, Musa Garba, told Daily Trust Saturday that over fifty houses were destroyed by the wind storm in that area alone.

Findings revealed that three other children also died around Izala Mosque area while around the old cattle market, Jantaro and Anguwan Kasa, over 58 houses were also destroyed by the windstorm.

At Makurna village, located about 10km from Mutumbiyu town, more destructions were recorded but there was no casualty.

At the entrance of the village, a primary school had its roof blown off while inside the village, several houses collapsed.

Blown off roofing sheets were deposited on trees top and on top of other buildings.

A resident, Bello Dauda, told Daily Trust Saturday that in the history of the village, such devastating windstorm was never experienced.

He said more than 70 houses were destroyed while foodstuff worth thousands of Naira were also destroyed.

Bello Dauda noted that with the high cost of building materials, it would be very difficult for those affected by the windstorm to repair their houses immediately.

“We appeal to the Taraba State government and the federal government emergency management agencies to assist us with relief materials, especially building materials, to repair our houses,” he said.

The chief of Mutumbiyu Chiefdom, retired Justice Sani Muhammed, who visited the affected areas, condoled with the parents of the deceased children.

He also called on the National Emergency Management Agency and Taraba State Government to assist victims of the wind storm disaster with relief materials.

The monarch also advised his subjects to stop cutting down trees which he said was responsible for the windstorm being experienced during the first rain of the year in recent time.

“The negative impact of desertification is now being felt every where. The devastating wind storm and erosion might not be unconnected with destruction of forest,” he said.

The operations officer in charge of Adamawa and Taraba states of the National Emergency Management Agency, Mr Ladan Ayuba, told Daily Trust Saturday that the agency has embarked on assessment tour of areas affected by the windstorm with a view to ascertain the level of destruction and provide relief materials.