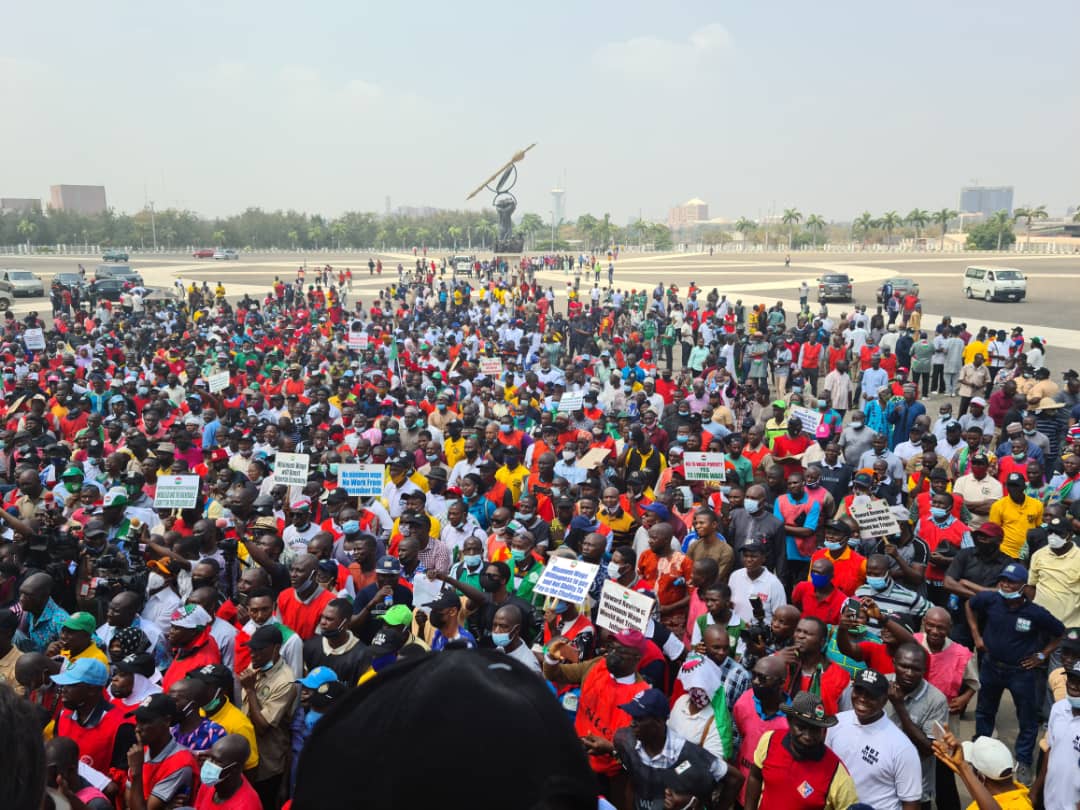 Thousands of workers under the aegis of the Nigeria Labour Congress on Wednesday stormed the National Assembly in Abuja to protest against a bill seeking to move the national minimum wage from the exclusive legislative list to the concurrent list.

The protesters chanting solidarity songs and carrying placards with various inscriptions arrived at the National Assembly at 11am.

They had marched the Unity Fountain in Maitama with their banners and loud music to the National Assembly.

They disrupted vehicular traffic as most lawmakers, staff and visitors were forced to make a detour into the National Assembly complex through the Villa and the Secretary to the Government of the Federation (SGF) gates.

Several commuters and motorists around Ahmadu Bello Way, Shehu Shagari Way and the Federal Secretariat had a hectic time assessing their destinations during the protest.

The Deputy Chief Whip of the Senate, Senator Aliyu Sabi Abdullahi, met the protesters at the MOPOL gate of the National Assembly and joined them in marching into the main complex.

The protesters were officially received at the forecourt of the National Assembly by the Senate President Ahmad Lawan represented by Senator Sabi Abdullahi and the Speaker of the House of Representatives Femi Gbajabiamila represented by the Leader of the House, Alhassan Ado Doguwa.

The bill which was sponsored by Garba Datti, lawmaker representing Sabon Gari federal constituency, has passed first and second reading in the House of Representatives.

NLC President, Ayuba Wabba, who expressed labour’s opposition to the bill, said workers would not allow “hard fought rights which are global standards to be bastardised by opportunistic and narrow minded politicians.”

Meanwhile, the organised labour in Ekiti State has accused All Progressive Congress (APC) governors of sponsoring the bill seeking removal of the national minimum wage from the exclusive legislative list to the concurrent list.

The union leaders made the allegations while protesting against the plans by the House of Representatives to alter the present wage structure, which gave the Federal Government the exclusive power to negotiate minimum wage for workers in the country.

The labour leaders converged at the popular Fajuyi park in Ado-Ekiti, the state capital around 8:45am and took off for the protest at about 10:15am.

“It’s saddening and disheartening that one Hon. Garba Datti which we all know are sponsored by governors of the APC, the enemies of workers, said minimum wage should be removed from the exclusive list to the concurrent list.