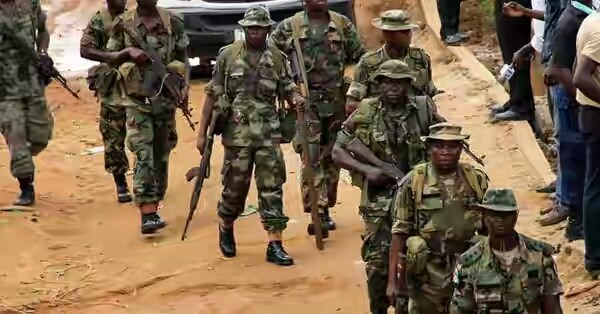 At least 12 communities in the Essien Udim Local Government Area of Akwa Ibom State have been displaced during last Tuesday invasion by soldiers over criminal activities in the area.

The Chairman of the LGA, Mr Anthony Luke, disclosed this in a message sent to the displaced persons after the raid.

According to him, the activities of hoodlums led to the displacement of the people from their homes as lives and property in the area were no longer safe.

Luke explained that heinous activities of criminals began in Essien Udim LGA on February 22, 2021, when the hoodlums attacked a police officers on patrol and their vehicle at Ikpe Annang junction, on Ikot Ekpene-Uyo Road

He recalled another attack on Nigerian Customs Service personnel at Nsasak junction on Aba-Ikot Ekpene Road before the hoodlums later set the Essien Udim Divisional Police Station at Nto Nsek ablaze and carted away a lot of ammunition.

“By their criminal activities, such as extortion, intimidation, robbery, and general abuse of the fundamental human rights of the people, the situation degenerated to a point that the people were living in fear,” the LGA chairman said.

“Let me use this medium to express my deepest gratitude to the Catholic Bishop of Ikot Ekpene, Dr Camillus Umoh, for his magnanimity. The bishop has not only graciously offered accommodation in the Catholic Cathedrals for the internally displaced persons (IDPs), but has also promised to partner the council in taking care of the people until it is safe for them to return home,” he stated.

He said the state government was working to ensure that normalcy would return so that the displaced persons could go back to their homes.