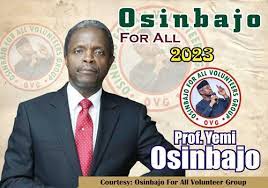 Campaign posters of Vice-President Yemi Osinbajo for the 2023 presidential election have surfaced on the streets and other areas in Osogbo, Osun State capital.

Many residents were surprised on Monday to see the walls of their houses and other buildings covered with posters, displaying Osinbajo for President in 2023.

The leader of the group that pasted the posters, Peter Ogundeji, said that they were backing Osinbajo for the presidency because he is eminently qualified.

He said: “Our group, which has membership across various geo-political zones both young and old, re-established that the Vice President or any of his relations nor his staff members has a hand in how the organisation was formed or being run as we wholly a volunteer group.

“Whether Prof Yemi Osinbajo has shown interest to run for 2023 presidency or not, “Osinbanjo For All Volunteer Group “ remains firmly committed to its stance that Osinbajo has all that it takes to take our country it places in destiny comes 2023 and beyond.”

Related Topics:FeaturedProf. Yemi Osinbajo
Up Next