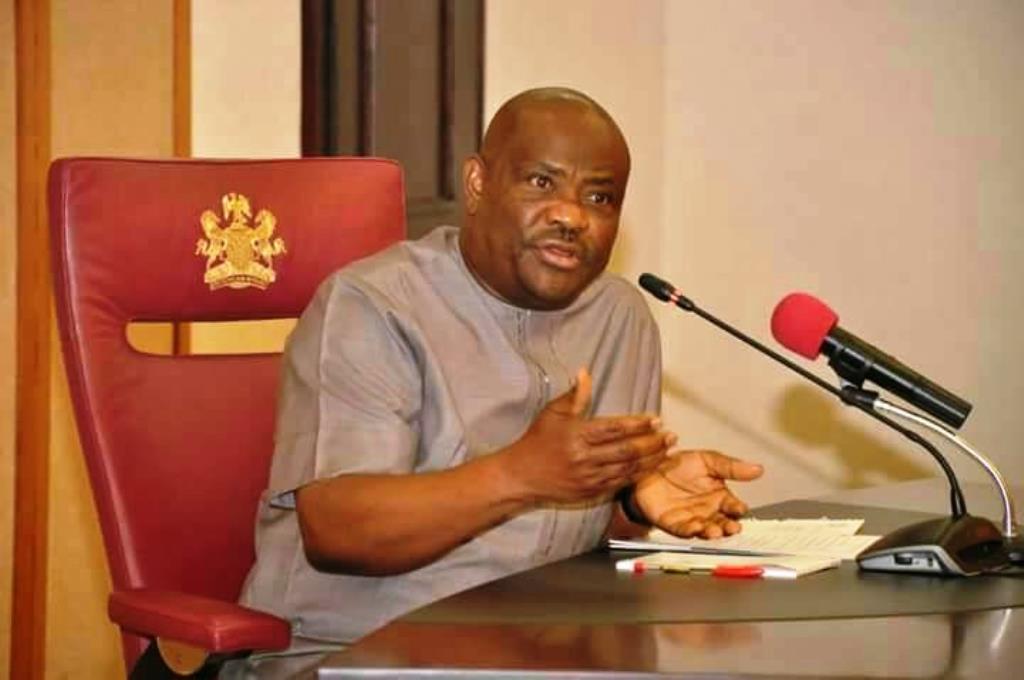 The Rivers State Governor, Nyesom Wike, Tuesday in Abuja tasked the National Working Committee of the main opposition, Peoples Democratic Party, to repay him with the party’s presidential ticket for his loyalty and struggle against the Uche Secundus-led NWC, which he said, has brought them into office.

This is as he warned the leaders against appointing delegates who have taken sides with some aspirants on the Primary Election Committee.

Wike also alleged sabotage over a power outage that almost marred his visit to Wadata Plaza. The power outage, our correspondent observed, was a result of lack of diesel to power the Secretariat generator; forcing the presidential aspirant to address the audience without a public address system.

According to him, “The household name now is Wike, so don’t make a mistake and lose Wike. Because if you lose Wike, you have lost the election. It is not our prayer that we should lose the election.

“It is important I take this opportunity and let you know that I am prepared. Psychologically, mentally and in all aspects I am very much prepared.

“So let us not waste time. Go and tell our people that you have seen the right person and the right person is Wike. It is important you do the campaign for me, that was how I did it for you too.

“When I was fighting the former NWC, some of you were supporting them. Now all of you are here. One good turn deserves another. So you people should also payback. Because you didn’t go to campaign, but now are seated here. So payback.

“But please do us the favor of conducting a free and fair election, that will be an advantage for us to win in 2023.”

“So, Mr. Secretary, I hope your boys did not sabotage us and if they did not, they will only be held responsible for not doing their job very well.”

The former minister of state for education said, in choosing a flagbearer ahead of next year’s election, the party must not consider those aspirants who lost their states and couldn’t deliver victory to the PDP in the 2019 presidential elections.

He noted the party must be wary of opportunistic aspirants who fizzle away once they don’t clinch the presidential ticket.

“I have tried it in my state, and it has worked. Most of you who go to Rivers State will always see me with my leaders, trying to find out what we’re going to do. It is not easy, but it works. Every person in government must carry the party along.

“And here’s what I think if I’m given the opportunity that I will liaise with the party, find out the views of the party. And then with that synergy, you will see how the government will perform.

“But again, Nigerians are waiting. Who are we going to present? What is the track record of that person? What is your track record? Not those who you give tickets to, tomorrow they fail, you won’t see them at the party again. And when you don’t give them the ticket, they will also leave the party, no that is not the way it should be.

Wike also distanced himself from the consensus efforts by the trio of former Senate President, Bukola Saraki, and governors Aminu Tambuwal and Bala Mohammed saying “I don’t believe in these people going around on consensus. I told them that their consensus move is shine shine bobo, the more you look, the less you see. I say I am not going to buy it. It will not work and I am not a party to it.

“Mr. Chairman, since I know that members of NWC are also delegates, I come to present myself to you and also woo you because you are entitled to vote. I am wooing you to vote for me because I have the capacity to make PDP win the election in 2023.

“To show you how serious I am, I did not come here to negotiate for the Vice President. I came here to win this election and I will win the primaries on May 28/29.

“I did not buy Senate forms or told somebody to buy form and hold it for me. No! It is the only form I bought and that is for the presidency of Nigeria. I am not going to run for any other election.”

In his response, the Party’s Chairman, Dr Iyorchia Ayu, noted that it is impossible to heed Wike’s call for support and hold a free and fair primary at the same time.

He assured the governor of the party’s determination to deliver a candidate with whom it can win next year’s election.

“I can assure you that there is no sabotage. The power outage we have experienced is part of the challenges PDP is trying to solve when we get power in 2023.

“On one hand, you want s level-playing field. On another hand, you want the NWC to canvass votes for you. But we can assure you they’ll be no power play or manipulation. We will hold a fair convention,” Ayu said.