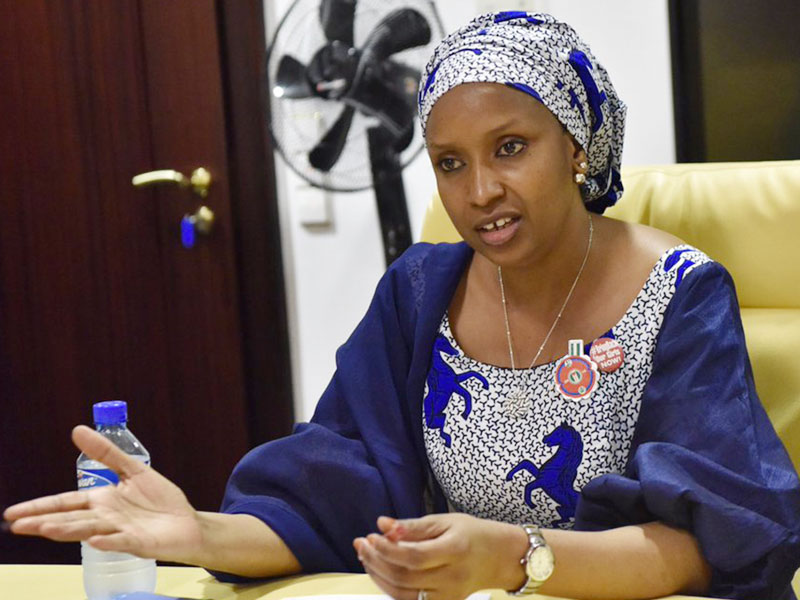 The Managing Director of the Nigerian Ports Authority, Hadiza Bala-Usman, has disclosed that those who attacked the corporate headquarters of the agency in Lagos recently were about 300 hoodlums and they destroyed 60 vehicles.

She said the hoodlums who forced their way into her office, were bent on grounding port operations at Tin-Can, Apapa and Calabar seaports as they vandalised some facilities before setting fire to 27 vehicles and a section of the NPA building.

She spoke in Lagos after conducting some journalists round some of the areas torched by the rampaging urchins.

Usman said, “The NPA regrets the attack on its 26/28 Marina Road, Lagos, corporate headquarters and the Tin can Island Port by unknown persons on Wednesday October 21st and Tuesday October 20th, 2020 respectively.

“The attack on the Tin can Island Port commenced at 9:45am on Tuesday October 20th 2020. The hoodlums made an attempt to forcefully gain access into the port, attacked the administrative building and set ablaze a truck which was evacuating cargo. It took the combined efforts of officers of the port authority police, the police mobile force and the Nigerian Customs Service to repel the attack.

“The attackers at the headquarters numbering over 300 persons, gained access into the premises at 8:42am on Wednesday October 21st 2020 from the outer Broad Street wing brandishing daggers, sticks and cutlasses.

“After attacking, disarming and chasing the security personnel on duty out of the headquarters premises, the attackers proceeded to burn and vandalise several vehicles belonging to the Authority and some members of staff. They thereafter set a wing of the office building on fire.”

The NPA MD said after the dust had settled, it was discovered that the invaders also went away with a Toyota Prado SUV and a Hilux patrol van

An assessment of the extent of damage, she also said, showed that apart from the annex wing that was burnt, many offices were vandalised, while computers, printers, water dispensers and other electronic devices were looted.

“A total of twenty-seven (27) vehicles, including cars, utility vehicles, pick up vans and staff buses were set on fire, while thirty-three (33) other vehicles, twenty-two of which belong to members of staff were vandalised. A Toyota Prado SUV, a Bajaj Motorcycle and one Hilux patrol van were also stolen from the premises.”

She however stated that the Nigerian military invited to save the situation, successfully dispersed the hoodlums and reclaimed possession of the premises as well as secured other port facilities.

“Upon knowledge of the attack, officers of the Nigerian Armed Forces were invited and deployed on the premises. They successfully dispersed the hoodlums and reclaimed possession of the premises following which the authority’s firemen were able to gain access into the building and put out the raging fire.”

She, however, declared that the situation had not in any way affected operations of the authority, adding, “We have continued to render our services unhindered.”

She recalled that the hoodlums had earlier threatened to burn down the Tin-Can Island and Apapa port before they were repelled by officers of the Nigeria Customs Service and mobile police officers.

Usman said the NPA would not have to suffer much of the huge loss as “all assets of the authority are comprehensively insured, and insurers are currently undergoing an assessment of the damages.”

She expressed gratitude to those who quickly responded to the issue and was happy that no life was lost especially because “some members of staff who were on critical duties were in the building at the time of the attack.”

“The authority recognises the gallantry of men of the Nigerian Armed Forces and our firemen whose intervention restored normalcy. We also appreciate the concerns of all stakeholders and citizens who have reached out with kind words of support and encouragement,” she said.