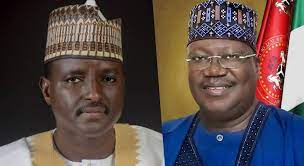 The Senate President, Ahmad Lawan, has been named the candidate for the All Progressives Congress for Yobe North senatorial district for the 2023 elections.

But Bashir Machina, who won the APC primary for the district, has insisted that he will not step down for the Senate President.

Lawan had contested the APC presidential ticket, and hours before the primary commenced, he was announced by the APC National Chairman Abdullahi Adamu as the consensus candidate of the party.

However, the consensus decision was rejected a former Lagos governor, Bola Tinubu, eventually won the party’s ticket at the primary concluded on June 8.

Machina had insisted that he will not withdraw from the senatorial race since he got the votes of delegates in an unopposed election.

He said on Wednesday, “I’m sure he did not plan to go back to the national assembly. That is why he contested for the presidency and lost. This is democracy. The space is free. A certain period of time was given for people to want to contest. Timetables were set, guidelines were produced by the parties, and eventually elections were held.”

A signed list of APC candidates for the election obtained on Friday showed that Lawan is the party’s candidate for Yobe North.

Related Topics:APCLawanMachinaYobe North
Up Next