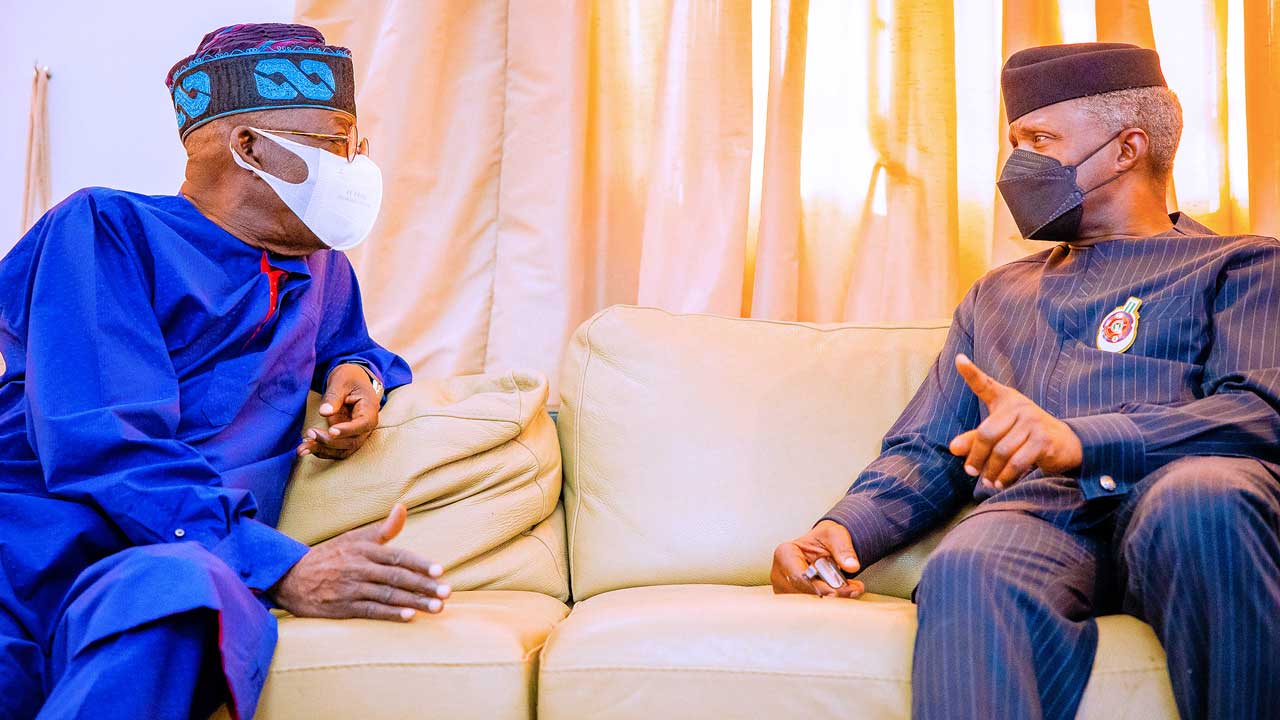 …APC Govs defend consensus option, Osinbajo, Tinubu clash of interest
From Romanus Ugwu, Abuja
National Leader of the All Progressives Congress (APC), Asiwaju Bola Ahmed Tinubu, has dismissed the declaration of his hitherto political godson and Vice President Prof Yemi Osibanjo, to contest for the 2023 presidential election, stressing that he does not have any son old enough to make such declaration.
He spoke on the sidelines after a consultative meeting with the APC Progressive Governors Forum (PGF) in Abuja on Monday, refusing to be drawn further into the declaration of the Vice President to contest.
Stating his mission in the meeting with the governors, Asiwaju claimed that it was part of his consultation with relevant stakeholders to actualize his ambition of replacing President Muhammadu Buhari after the expiration of his tenure in 2023.
Asked to comment on the declaration of his political godson, Osinbajo, to contest for President, the former Lagos State governor simply said: “I don’t have any son grown up enough to make such declaration.”
On his mission, Asiwaju said: “My mission here is to seek collaboration, support and encouragement of my party, the APC, for my ambition to become the president of the Federal Republic of Nigeria as replacement for President Muhammadu Buhari after his tenure.
Equally fielding questions from newsmen after the meeting with Asiwaju, the chairman PGF and Kebbi State governor,  Abubakar Atiku Bagudu, said that there is nothing untoward in the ruling paty opting for consensus candidate during its presidential primary.
He also claimed that there is nothing wrong in Vice President Osinbajo contesting the presidential ticket against his godfather, Asiwaju, arguing that it is confirmation of the quality of the party.
READ ALSO:
Asked if the duo contesting for the ticket is putting the governors in tight corner, he replied: “No, no, no. In fact, in the contrary, we appreciate our party because it has become a party that has endeared itself to Nigerians. We have many brilliant people in our party, some serving and some not serving.
“The fact that we have people in our party that express desire to lead the party into the highest office in electoral contest shows how much this our party has resonated with Nigerians and our party members.
“For us, it is a hallmark of success that people are showing interest, but at the end of the day and because they are leaders of the party, they will always put the party’s interest at heart,” he argued.
Dousing the tension that many are afraid that APC may adopt consensus candidate for the presidential ticket, he said: “We always encourage our party to go for the best. Don’t forget that in the 2015 presidential election primary, President Buhari contested against several others and it was a beautiful contest.
“There is nothing wrong. Members of the party always want to see consensus if it is possible but we are a democratic party. In our last convention, we had consensus in some of the offices and election in some others. There is always misrepresentation of consensus as if people are being snowballed into positions they would rather not take.
“APC has done well as a party, President Buhari has led the party ably well and we believe strongly that come 2023, Nigerians will see another President of the APC extraction,” he assured.
On the reason for the meeting with the governors, he said: “Asiwaju Bola Ahmed Tinubu, this morning, met members of the Progressive Governors Forum where he stated what he has made public already -his intention to seek for the office of the President come 2023 which he has already announced publicly. He briefed us on his reasons, his thinking and his message.
“All the governors in attendance graciously came to listen to him. He acknowledged the role of the Governors in the last convention of our party, where, according to him, the governors of the party steadied the party by helping in the evolution of the leadership that is accepted and widely acknowledged as that which we wish for our party. We appreciated him, his message and will definitely discuss the message at one of our forum meetings,” he said.
SUN
Related Topics:2023declarationFeaturedOsinbajoTinubu
Up Next