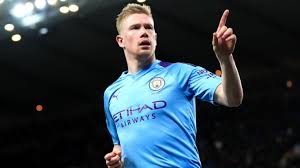 Ahead of the England and Belgium clash on Sunday, the Belgium midfielder Kevin De Bruyne says he expects England to win Euro 2020 and the 2022 World Cup, with the current form of the quality of players in their squad.

The Manchester City star is part of the Red Devils squad taking on the Three Lions in a UEFA Nations League game at Wembley on Sunday.

Being part of the Premier League, De Bruyne has seen at firsthand the talent currently in the England squad and is tipping them to win the two major tournaments.

“There are always a lot of teams who want to win it, but I think the team they have, the players who play in top clubs, they should do that,” he added.

Belgium currently the world’s top-ranked team beat England twice at the 2018 World Cup but they will be without key men Dries Mertens and Eden Hazard this Sunday.

In today’s clash, analysts say England may be looking to exact a small measure of revenge for their 2018 World Cup defeat.

Gareth Southgate’s side were beaten by the Red Devils in the group phase and the third-place match in Russia and the teams clash again now in the Nations League.

Belgium are currently top, with two wins from two, while England have a win and a draw after games against Iceland and Denmark.

Both teams played a midweek friendly with rotated teams, as England beat Wales and Belgium drew with Ivory Coast.

England will have Jadon Sancho and Tammy Abraham available again after they were forced to miss the Wales friendly having attended a party last week, but Ben Chilwell remains absent through injury.

However, captain Harry Kane could miss out after suffering a muscular injury in training.

Belgium fully rotated their side for the match against Ivory Coast and so are likely to revert to  full-strength line-up for this fixture, with the exceptions of Thibaut Courtois and Dries Mertens, who have withdrawn from the squad.