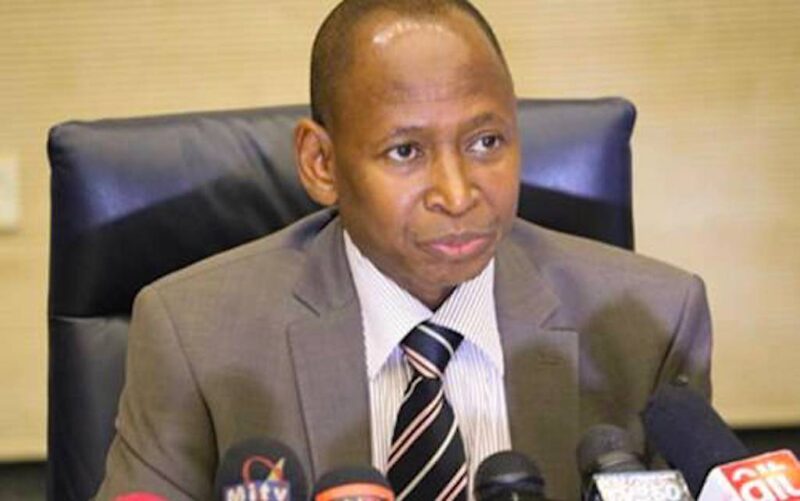 A HIGH Court of the Federal Capital Territory (FCT) in Maitama heard yesterday that the suspended Accountant-General of the Federation (AG-F), Ahmed Idris, voluntarily returned about $900,000 in cash.

The witness said the returned cash was part of the public funds allegedly diverted by the embattled AG-F.

The court also heard how N84.7 billion was taken from the $2.2 billion due to the nine oil-producing states, and shared by some senior government officials.

An official of the Economic and Financial Crimes Commission (EFCC), Hayatudeen Ahmed, made the disclosure while testifying at the trial of Idris and three others.

The suspended accountant-general; his former Technical Assistant, Godfrey Olusegun Akindele; a director in the Office of the AG-F, Mohammed Kudu Usman, and a firm linked with Idris – Gezawa Commodity Market and Exchange Limited – are being tried on a 14-count charge of stealing and criminal breach of trust to the tune of N109 billion.

Ahmed, who testified as the first prosecution witness, was led in evidence by Rotimi Jacobs (SAN). He gave details of how his team investigated a petition in which Idris was accused of abuse of his office and compromised government’s platforms, such as the Treasury Single Account (TSA), the Government Integrated Financial Management Information System (GIVMIS), among others.

He said out of the N84.7 billion that was shared among some government officials, N32 billion has been recovered so far.

The witness also told the court how Idris allegedly hired his ex-aide, Akindele, as a consultant to distribute N84.3 bilion out of the N84.7 billion.

He said Akindele later gave Idris N4.2b in appreciation for his engagement as the consultant to handle the distribution of the money.

The witness said: “After the petition was assigned to our team, investigation commenced. We wrote to banks, the Corporate Affairs Commission (CAC) and other government agencies.

“From analysis of bank documents received, we discovered that a Baita Kura of B. I. Kura Enterprises, a bureau de change operator, made several deposits of money amounting to N280 million between 2019 and 2021 into the account of the fourth defendant – Gezawa Commodity Market and Exchange Ltd.

“We discovered that the payments made were on the instruction of the first defendant.

“We also discovered from other bank statements analysis that a certain Architect Mustapha Muktar of Marcs and Construction Ltd received various sums from Baita Kura, amounting to about N866 million.

“Based on this, we invited Architect Mustapha, who gave statement and explained that the money he received from Baita were on the instruction of the first defendant.”

The witness claimed Mustapha said Idris asked him to use the money for the construction of the Gezawa Commodity Market and Exchange in Gezawa Town, Kano.

He said his team learnt of the agitation by the nine oil producing states about the lack of deductions of 13 per cent derivation accrued to them from the Excess Crude Account (ECA).

The witness added: “It was discovered further that this agitation was tabled before the Post-mortem sub-committee of the Federation Account Allocation Committee (FAAC).

“The committee deliberated on the request and came up with a figure of about $2.2b as what was due to the nine oil-producing states. And, that deductions for this payment would be made over a 60-month period.

“A total of 11.5 per cent of the total sum, which is equivalent N84.7 billion, was set aside as facilitation for some public officials to approve and release the request. This was done under the guise of consultancy.

“The services of Olusegun Akindele & Co, a firm belonging to the second defendant (Akindele), was used for this purpose.

“The account of Olusegun Akindele & Co received the cumulative sum of N84.3 billion, representing 9.8 per cent, less taxes from the 11.5 per cent that was set aside earlier.

“He received the money in his First Bank account, from the FAAC withheld Escrow account, under the control of the first and third defendants (Idris and Usman).

“The third defendant is Mohammed Kudu Usman, a former director in the office of the AG-F.

“When the statement of account of Olusegun Akindele & Co was received, we analysed it and found that after the receipt of N84.3 billion, it was shared among five groups.

“The first group was the Revenue Mobilisation Allocation and Fiscal Commission (RMAFC) group, represented by a commissioner in the commission, by name Chris Akumas. It received 2.2 per cent out of 9.8 per cent, which amounted to N18.7 billion.

“After the second defendant received the money, he converted the amount to United States (U.S.) dollars and handed same to Chris Akumas for members of that group.

“The second group is the accountant-general group, represented by the first defendant, which received N18.1 billion, equivalent of 2.1 per cent

“Some of these funds were also converted to U.S. dollars and handed to the first defendant. From the second group, the third defendant received about N1.8b equivalent in U.S. dollars.

“The third group is that of the Commissioners of Finance of the nine oil-producing states, which received 2.5 percent amount to N21.4 billion. This same amount was converted to U.S. dollars by the second defendant and given to Chris Akumas for the group.

“There was the Abdulaziz Yari group, represented by the former governor of Zamfara State, Abdulazid Yari. This group got N17.15 billion, representing two per cent.

“Payment to this group was made to a company nominated by Yari, known as Fintes Consultancy Ltd. This was not paid in dollars. It was transferred to the company’s account on the instructions of ex-governor Yari.

“The last group is the group of the consultant, who got about 1.04 per cent, amounting to N8.9 billion, out of which he converted about N4.2 billion to U.S. dollars and handed to the first defendant as appreciation for nominating him as the consultant. The consultant benefited about N4.6 billion.

“The second defendant was invited and he made statement. He admitted to receiving and sharing the money as I had stated.

“These funds were also traced to the purchase of properties, both commercial and residential in several parts of Kano, the FCT, and Minna in Niger State.

“From the accountant-general group, $2.7 million, less 100 dollars, was recovered. N304m was also recovered from the group.

“Another N50 million was recovered from the third defendant, who is part of this group, in addition to properties recovered.

“The bulk of the N32 billion was recovered from the first, second and third groups.

“The sum of about N3b was traced to the construction of the commodity market at Gezawa Town, Kano, from funds received by the first defendant from the second and fifth groups.

“N504 million was also traced to the reconstruction of Alikhlas Supermarket also known as Kano City Mall, belonging to the first defendant, located at Mandarin area of Kano.

“In relation to the $2.7 million less than $100, the sum of $1.8 million cash was recovered from persons who received the $1.8 million from the first defendant.

“$900,000 less $100 was recovered from the first defendant himself, who returned same voluntarily.

“He returned it in cash, which has been received and registered as exhibit in this case by the commission,” the witness said.

They, however, objected to the admission of the defendants’ statements, which they claimed were obtained under inducement and duress.

Upon defence lawyers’ request, Justice Yusuf agreed to conduct trial within trial to ascertain the voluntariness or otherwise of the statements.

He adjourned till January 30 for the commencement of the trial within trial.

Wife Stabbed Hubby To Death For Making Move For Sex