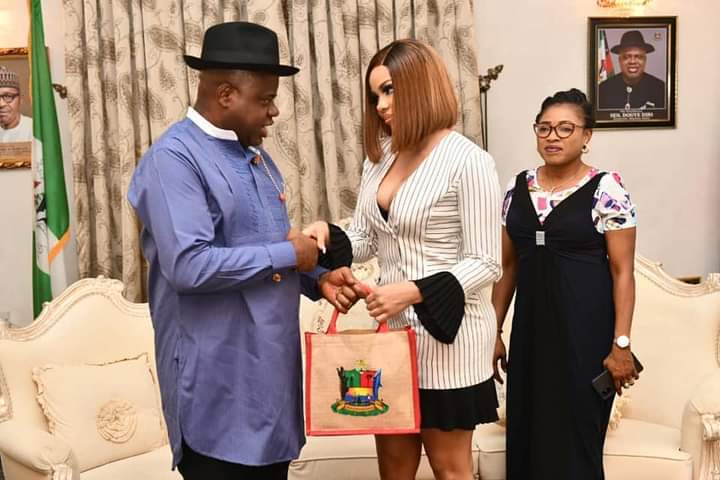 Nengi, whose full name is, Rebecca Nengi Hampson, was appointed as Senior Special Assistant to the Governor on Girl Child Development.

She emerged the second runner-up of the 2020 reality TV show, BBNaija lockdown edition.

The governor told Nengi that the state was proud of her performance and conduct at the just concluded TV reality show.

Diri announced the appointments in Government House, Yenagoa, on Friday when the Bayelsa-born former housemate visited as part of her homecoming activities.

The governor, in a statement by his Chief Press Secretary, Daniel Alabrah, expressed satisfaction with Nengi’s conduct, brilliance and for identifying strongly with her state during the show, adding that the government and people of Bayelsa State were proud of her.

Diri said, “On behalf of the people and government of Bayelsa State, I want to say that we are proud of you.

“Let our girls know that there is so much they can achieve in various facets of life. Arising from your participation, we were told that if not for other factors, you are the de facto winner of the show. So you are welcome back home.

“We believe that now that you have been recognised nationally and internationally, you will be the face of Bayelsa and I hereby announce you as the Senior Special Assistant to the Governor on Bayelsa Girl Child Development. The same goes for your fellow ex-housemate, Tarimotimi Sinclair aka Trikytee. So, both of you are hereby appointed Senior Special Assistants to the Governor.”

Responding, Nengi said, “I want to commend you, Your Excellency. You are doing a good job and we are so lucky to have you as our governor. I’m equally here representing thousands of Bayelsa girls all over the world.

“There are so many concerns that I have but now that we would work together, I hope that we can do so much for the girl child. I also want to use this medium to give back to the society. So, I’m going to be reaching out to people affected by the flood through the First Lady.”

Nengi’s former housemates have taken to their social media accounts to congratulate her.

Laycon, winner of the BBN lockdown edition, said on his Twitter account, “My senior special assistant ma. My SSA. Yes ma; anything for you ma. Clear the road for the SSA. @nengiofficial.”

Another housemate, Ozo, said via his Twitter account, “Congrats to @nengiofficial on your appointment for the position as the Senior Special Assistant to the Governor, Face of Bayelsa State and ambassador for the girl child Bayelsa State. Many more blessings.”

The third runner-up of the show, Neo Mobor Akpofure, also tweeted, “Omo my girl oo.. Senior Special Assistant to the Governor and Face of Bayelsa State. Congrats my sister @nengiofficial.”