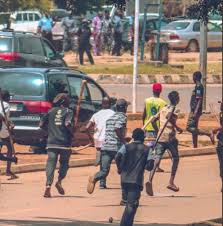 In Abuja, the Federal Capital Territory Security Committee has wielded the big stick, announcing a total ban on #EndSARS protests.

The FCT Administration, which accused the protesters of violating COVID-19 protocol, also said it was concerned that despite the scrapping of the Special Anti-Robbery Squad by the Inspector-General of Police, Mohammed Adamu, the protests had continued, disrupting the socio-economic activities of the city.

In Lagos, the thugs were seen in an online video at the Alausa venue of the planned protest causing commotion in the area.

The armed thugs reportedly came in buses and motorcycles loaded with cutlasses and other dangerous weapons.

They chased after the #EndSARS protesters.

Many youths including celebrities have been part of the street protests staged since last week in many states across the country against inhuman treatment by some police in the disbanded SARS unit.

Although the IGP has disbanded the squad and set up the Special Weapons and Tactics Team to replace SARS, the #EndSARS campaigners have continued the protests.

It said it was the outcome of a meeting held on Tuesday to review the security situation in the FCT was chaired by the FCT Minister, Malam Muhammad Bello.

The statement read, “While the committee recognises the rights of citizens as regards freedom of association and movement as enshrined in the constitution, it has observed that the unruly conduct of the crowd and manner of demonstrations are in complete violation of the COVID-19 safety protocols which were put in place to safeguard the lives of citizens. “These violations endanger the lives of not just the demonstrators, but also other citizens going about their legitimate concerns.

“For the avoidance of doubt, the COVID-19 guidelines regulating public gatherings recommend physical distancing, temperature checks, the use of facial coverings, amongst others.

“Clearly, all these guidelines were flouted by the protesters. Consequently, the committee directs that due to the dangers posed by COVID-19, all street demonstrations, protests and processions will not be allowed anywhere within the FCT.”

No SARS member will be part of SWAT – Police