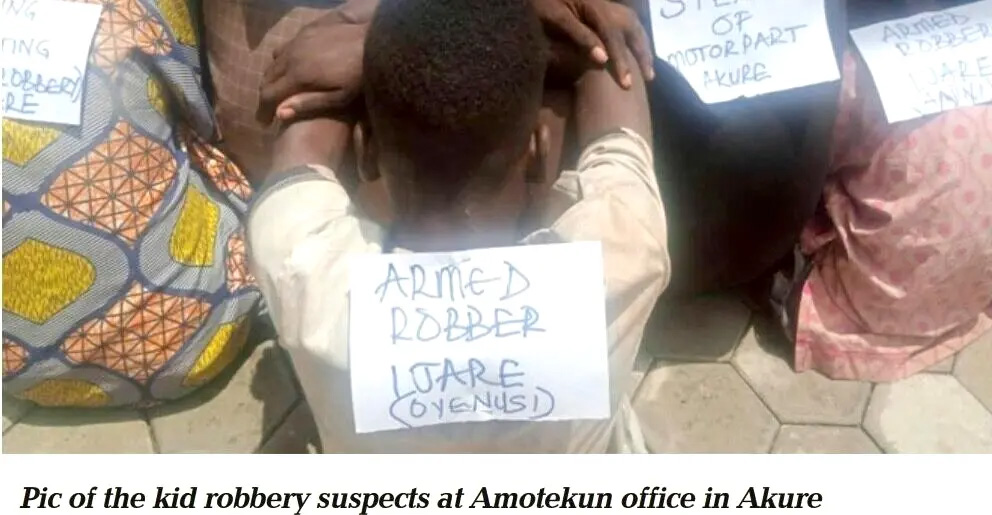 How my mother’s charms to make me disappear failed

Where we got our nickname

Three kid robbery suspects, Timileyi Femi, aka Anini, 13 years, Ojo Sunday- aka oyenusi, 15 years and Matti Lowe, aka Osunbo, 16 years said they had operated more than 46 times before they were apprehended by operatives of the Ondo state security outfit codenamed Amotekun.

In an interview after they were paraded by the Amotekun personnel in Akure, the state capital, the suspects also said that aside sharing the proceeds of their operations with their parents, they were also paying the house rents for their parents

Also arrested and paraded were the mother of Timileyin, Iyabo Femi who reportedly encouraged and fortified him with local charms while going for robbery operations, an herbalist, Adeyemi Ayodele and his mother, Kehinde Ayodele.

In his confession, Timilehin Femi (Anini) said; “I have been robbing since I was 12-years-old. I used to hide my gun inside the ceiling after every operation. Nobody knew about this. Whenever we were going for any operation, l would quietly climb the ceiling and remove the gun.

“Sometimes I gave the gun to our herbalist to keep if it was not possible for me to climb the ceiling after an operation and I needed to hide it.

“My mother used to fortify me with charms so that I would not be caught by policemen or other security operatives.

“After every robbery operation, we used to handover the stolen goods to the herbalist who would sell them and give us cash in return. We never queried him on the sale of the items, all we needed from him was to sell the goods and hand over cash to us.

“We also gave some of the proceeds to our mothers after operations. We have participated in about 46 operations. The charm that my mother did for me enabled me to disappear whenever I was about to be apprehended.

“The charm however failed when the Amotekun officers arrested me. I don’t know what happened that day, it just didn’t work.

“My mother was surprised that I was arrested cheaply and she asked me whether I had eaten what I was advised not to eat that could render the charm ineffective”.

In his own confession, Sunday Ojo (Oyenusi), said; “ l have lost count of the robbery operations we have been involved in. We were given the names Oyenusi, Anini and Osunbor by people within our neighborhood because of the manner we operated”.

Timileyin’s mother, lyabo Femi, who also spoke said, “Timileyin is my only son, he used to engage in robbery anytime he was with Sunday. So, I took him to a church for deliverance to make him stop robbing. In the church, I was given a soap with which to bathe him by the river side but he still continued robbery anytime he saw Sunday who is a bad influence on him. I didn’t do any charm for him, it was only the soap I was given in the church that I took him to which I used to bathe him”.

The state commander of Amotekun, Chief Àdetunji Adeleye, while parading the suspects said that “it is amazing that we have another generation of armed robber who named himself Oyenusi. And here is a 12-year-old confessing that he had to climb a stool to keep his weapon in the ceiling and he was being empowered by the mother to guarantee that nobody could arrest him.

“He has now graduated to a full blown armed robber and was operating a gang of seven members. He is the youngest but the most vicious and powerful.

“We also have a group that specialised in stealing of generating sets as well as those that kill for ritual purpose. We have rapists and a dare devil armed robber arrested in Ore with some cartridges”.

Adeleye said that investigations have been concluded on the suspects and they would soon be charged to court.

He assured the people of a crime free state, saying “in our usual determination to guarantee safety of lives and property, we have commenced 24 hours patrol in the 18 local government areas with the assistance of all other security agencies in the state”.

Over 100 killed, vehicles razed as illegal refinery explodes in Imo

As Alaafin remains buried, Bashorun of Oyo takes over throne