(UPDATED)BREAKING: Olubadan of Ibadan to be buried today -Palace 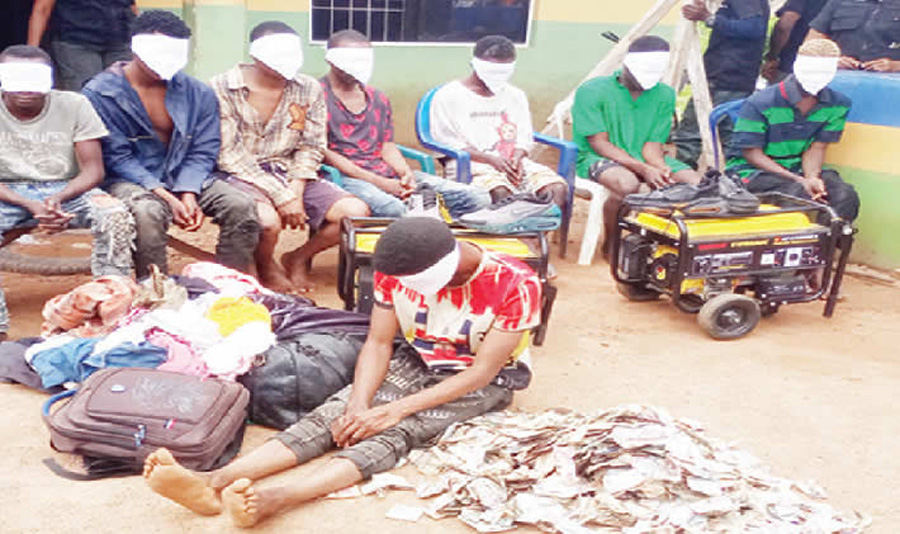 The police in Ekiti State have arrested a 32-year-old man, Olufemi Akindele, for allegedly stealing N620,115 from the offering vault of the Christian Apostolic Church Campground at Ikeji Arakeji, Osun State.

Akindele, who was among 20 suspects paraded by the Ekiti State Police Command at the Rapid Response Squad Office, Ado Ekiti, on Tuesday, was intercepted on a motor bike by policemen on stop and search along the Igbara Odo-Akure Road and was found with a school bag loaded with different denominations of naira notes.

The state Police Public Relations Officer, Sunday Abutu, said, “During interrogation, the suspect confessed that he travelled all the way from Iropara Ekiti to the CAC Campground, Ikeji, Arakeji, Osun State, to steal a cash sum of N620,115 from the offering vault of the church.”

The suspect told journalists that being a former security at the campground before his voluntary resignation, his knowledge of the place gave him an insight of where the church kept its money following which he decided to go there for the operation.

Abutu also paraded three others for alleged conspiracy and self-kidnapping.

The suspects were said to have demanded N5m ransom.

Also, the police said a 27-year-old man, Usman Mohammed, who was arrested for alleged involvement in different kidnapping operations in the state, confessed that he and other gang members on April 22, 2022, kidnapped one Omoboade Adesina in her farm settlement along Ago Aduloju/Aso Ayegunle Road, Ado-Ekiti.

The police spokesperson said the suspects would be charged to court at the end of investigation.

Presidential candidate of The Labour Party, LP, Peter Obi has dismissed claims that the Indigenous People of Biafra, IPOB, is a terrorist group.

Obi, who made this assertion while in an interview with Channels Television, stated that  IPOB members live around him and do not constitute a threat to the country.

He said, “The only thing I disagree with is naming IPOB terrorist; they are not terrorists. Those who took the decision may have information that I don’t have.

“I stay in Onitsha, and I can tell you that they are people. I pass them on the road every day.

“I meet and live with them; in fact, I usually see people gathering, and I have never had the sense of threat or molestation from them, even when they gather,” he said.

Obi maintained that IPOB members are not terrorists.

Recall that the Nigerian government had proscribed IPOB following the secessionist agitation  actualization of Biafra.

Meanwhile, the Federal High Court sitting in Umuahia, Abia State, has fixed October 27 for judgement in the suit filed by the Leader of the IPOB, Mazi Nnamdi Kanu against the Federal Government.

Kanu in the suit filed on his behalf by his Special Counsel, Mr Aloy Ejimakor, is challenging his extraordinary rendition from Kenya by the agents of the Federal Government.

FORMER Acting Chairman of Economic and Financial Crimes Commission, EFCC, Mr Ibrahim Magu, has been exonerated over false claim that Pastor Emmanuel Omale of the Divine Hand of God Prophetic Ministry and his wife, Deborah laundered N573million for him.

During the investigation of Magu by the Justice Isa Salami-led presidential investigation panel, it was claimed that an investigation by the Nigerian Financial Intelligence Unit, NFIU, revealed that Magu paid N573million into Omale’s church’s account with which a property was allegedly bought in Dubai, the United Arab Emirates, UAE.

But in his verdict, yesterday, Justice Halilu noted that the evidence before his court showed that Omale’s bank admitted error in its report to the NFIU, of entries in Divine Hand of God Prophetic Ministry’s account.

The judge further held that the bank claimed that the purported N573 million was wrongly reflected as credit entry in Divine Hand of God Prophetic Ministry’s account by its reporting system, which it recently upgraded.

Justice Halilu noted that the bank admitted the error, which occasioned incalculable damage to the reputation of Pastor Omale, his wife and their church both within and outside the country.