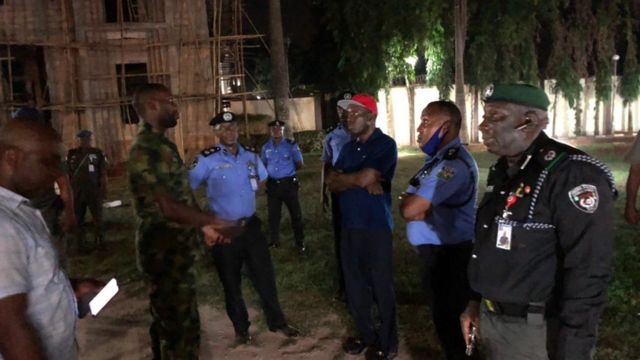 Some soldiers attached to Ojo military cantonment have beaten a police inspector identified as Monday Orube to death after an argument over traffic right of way in Lagos.

The incident happened on Wednesday along Lagos-Badagry expressway, a location not far from the Ojo military cantonment.

According to Daily Independent, the argument started after three police officers who were acting as traffic wardens stopped a road lane in order to allow other road users pass through.

The police officers did not know that they had inadvertently stopped the lane where a coastal bus carrying soldiers was passing through.

A source reportedly told the newspaper that the soldiers questioned the police officers on why civilians would be allowed to pass before them.

The soldiers were said to have insisted that they would pass through a one-way traffic — a development that led to an argument between the police officers and soldiers.

Angered by the police officers’ insistence on orderliness, the soldiers were said to have pounced on the officers, beating them severely.

The newspaper said the soldiers kidnapped two of the officers and took them to their barracks.

On their way, the soldiers were said to have noticed that the police officers had become unconscious and they decided to take them to a hospital in their cantonment.

One of the police officers identified as Orube died in the process.

Benjamin Hundeyin, Lagos police spokesperson, in a tweet on Friday, said senior military officers have paid a visit to Abiodun Alabi, Lagos police commissioner, over the “unfortunate death” of the police inspector.

Reacting to the incident, the army, in a statement on Friday by Olaniyi Osoba, acting deputy director of the 81 division, said it has constituted a board of inquiry to investigate the incident.

“The division is already in touch with the Lagos state police command to resolve the matter,” Osoba said.

“This incident is highly regrettable given the division’s disposition and zero tolerance for any misconduct.

“Accordingly, the division has instituted a Board of Inquiry to unravel the circumstances surrounding the unfortunate incident.

“At the end of the investigation, anyone found culpable will be made to face the full wrath of the disciplinary provisions.

“Consequently, the division wishes to commiserate with the Ojo Police Division and members of the family of the victim.”

Why Abuja-Kaduna train victims still in captivity, by ex-negotiator