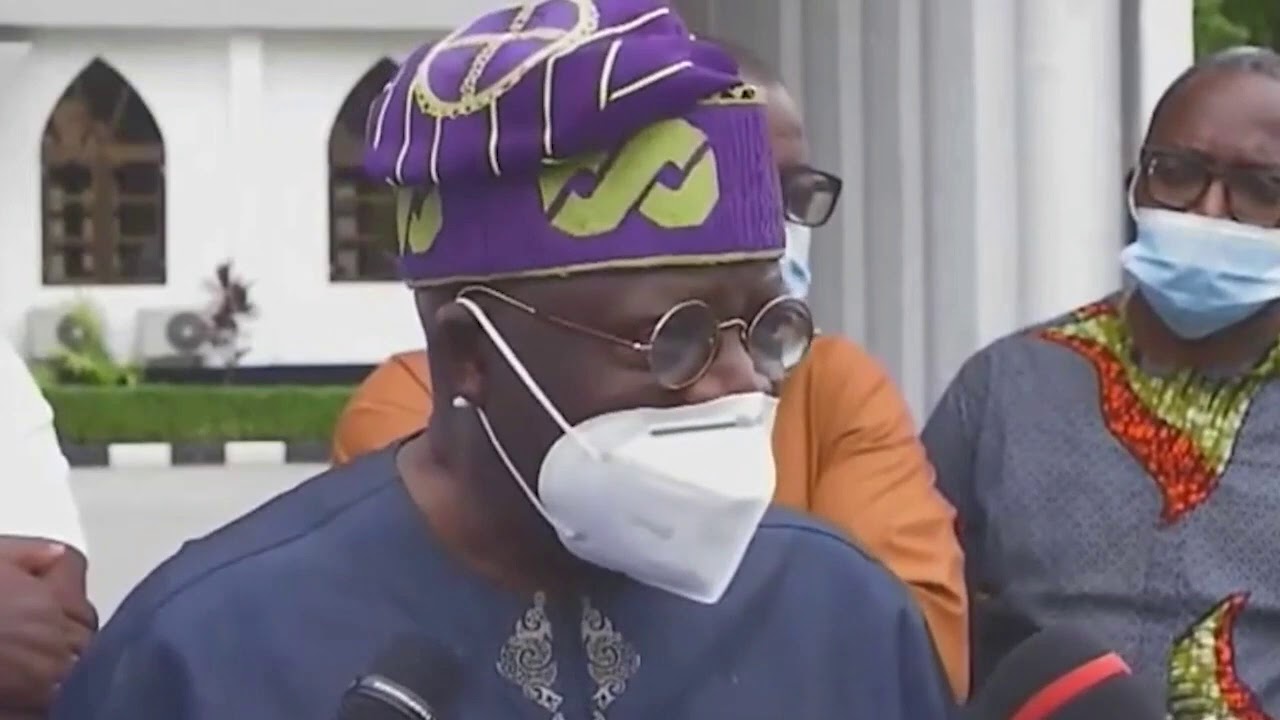 National leader of the All Progressives Congress (APC), Bola Tinubu, has paid a solidarity visit to the Lagos State Governor, Babajide Sanwo-Olu, days after the state suffered violent attacks from miscreants hiding under #EndSARS protests.

The attacks led to the death of many and destruction of public and private property including the palace of the Oba of Lagos, Rilwan Akiolu, and investments linked with the APC chieftain.

A television station, a newspaper house as well as assets of the Lekki Concession Company, the managers of the tollgate, which are seen as Tinubu’s assets, were torched by hoodlums.

Speaking with journalists later, Tinubu, who was asked about his whereabouts in the past few days, said he did not travel out of the country as earlier reported by some section of the media.

He said, “I didn’t go nowhere; I’m a Lagosian and I still hold the title of Asiwaju of Lagos and I am still a Jagaban.

“Fake news is all over the place. They say Seyi my son was kidnapped and was chased but look at him. I didn’t pay a penny to bring him here.”

Tinubu, a former Lagos State governor, condemned the recent invasion and massive looting of public and private assets in the state.

He told reporters that the purpose of his meeting with Governor Sanwo-Olu was to ask him if he had ordered soldiers to attack #EndSARS protesters at the Lekki tollgate on Tuesday.

The former Lagos governor said he asked Sanwo-Olu “if he didn’t order the attack, who ordered the attack? That’s all I needed from him.”

Tinubu stressed the need for a thorough investigation into Tuesday night attack.

“For those who suffered casualty from SARS, the commission of inquiry that is already set up will unearth that and will make their recommendations. I trust the calibre and the character of the people there; they are independent. That is one.

“Those who suffered casualty during the gunshots need to answer some questions too. Even though we want to help, we still must extract information that will help the government to prepare in future and understand how and when to react because the governor, in particular, is a youth.

“As a youth himself, he (Sanwo-Olu) quickly went to Abuja with the 5/5. The government immediately put into action, dissolved the SARS and had to work through other recommended actions, the needs they demanded. Within a few days, he reported back to the public. That is responsive enough.

“But where are we getting the looting, the carnage, the burning, the invasion of police stations, stealing of arms, maiming of the innocent? It is a handshake beyond the elbow.”

Many killed in Rivers as soldiers, IPOB members clash