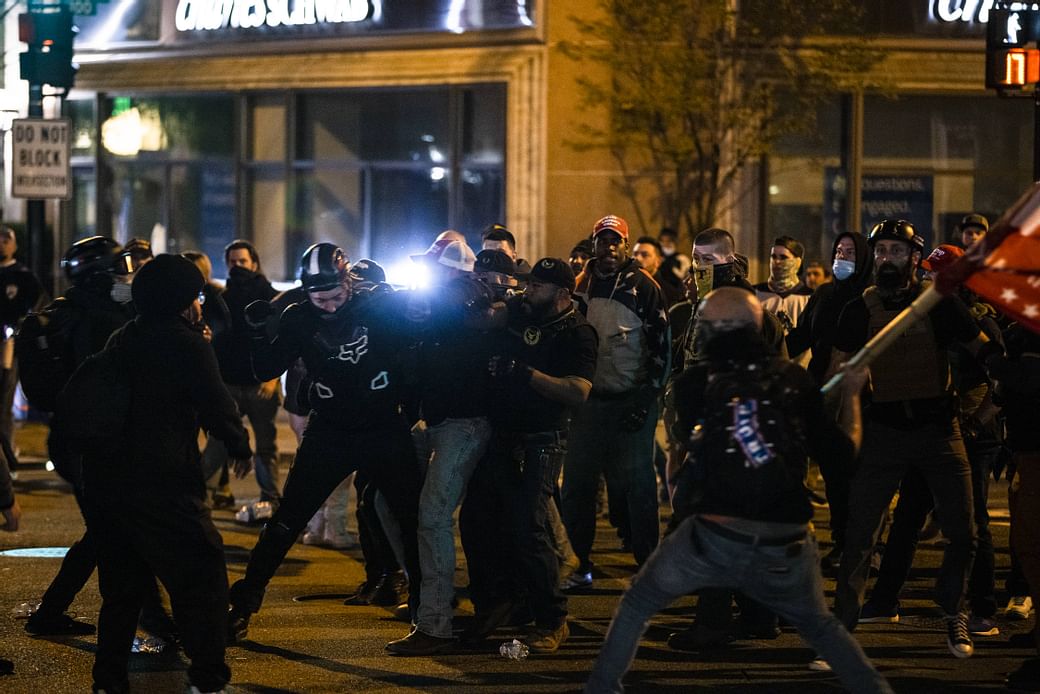 Violence erupted on the streets of downtown Washington, United States, after thousands of supporters of US President Donald Trump held a protest rally to back his unproven claims of massive voter fraud and electoral malpractices during the 2020 presidential elections.

The Outlook, Washington Post and several sources report that the “Million MAGA March”, held a week after Democrat Joe Biden was declared the winner of the November 3 election, was mainly peaceful throughout the day on Saturday, but by late in the night, clashes erupted between Trump”s supporters and counter protesters.

A mass brawl broke out later on Saturday night just five blocks away from the White House as counter protesters clashed with a group of Trump supporters.

According to reports, a man in his 20s, believed to be a Black Lives Matter protester, received serious injuries and was rushed to a hospital after he was stabbed in the back during the altercation. Two police officers were also injured.

The clash lasted for several minutes as the two groups wielded batons and pushed and shoved each other until cops intervened, the reports said.

Thronging to Washington DC from various parts of the US, participants of the Make America Great Again (MAGA) Rally asserted that Trump won the elections and that they were in the city to express their support to their leader.

Trump, who has not yet conceded the election to the projected winner, Biden, has repeatedly asserted, without evidence, that fraud and other irregularities deprived him of millions of votes in key battleground states.

According to Fox News, anti-Trump demonstrators allegedly hurled eggs at Trump supporters — or stole signs, hats and banners, and lit them on fire.

Anti-Trump protesters clashed with law enforcement in downtown DC as they tried to make their way to a hotel where Trump supporters were staying, the CNN reported.

Later in the day, Trump in a tweet alleged that news channels are not showing the massive gatherings in support of him, as he posted a picture of protesters of his MAGA rally.

“Instead they have their reporters standing in almost empty streets. We now have SUPPRESSION BY THE PRESS. MAGA!” he said.

Participants of the rally, which started at Freedom Plaza, chanted “four more years” and “stop the steal.”

Trump in a tweet blasted counter protesters who turned up at the Million MAGA March as ”Antifa scum” as he joked that they ran for the hills after violent scenes erupted in Washington DC on Saturday night.

The President claimed ”Antifa” had waited until the end of the march to attack attendees as he praised his supporters who “aggressively fought back”.

“Antifa SCUM ran for the hills today when they tried attacking the people at the Trump Rally, because those people aggressively fought back,” he tweeted.

Later, in a series of tweets, Trump attacked media outlets.

“The Fake News Media hardly even discussed the tens of thousands of people that came to DC Formed organically, and in many parts of the Country!

“The Silent Media is the Enemy of the People!!! Human Radical Left garbage did this. Being arrested now!” he tweeted.

Trump”s campaign has also filed legal challenges complaining that their poll watchers were unable to scrutinise the voting process. Many of those challenges have been tossed out by judges, some within hours of their filing.