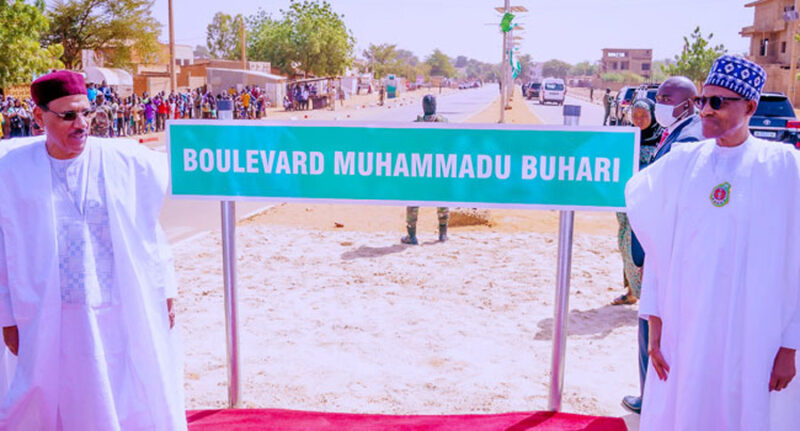 The Presidency on Thursday said the naming of a road after President Muhammadu Buhari in Niger Republic was an indication of the tremendous respect which Nigeria’s neighbours have towards him.

Senior Special Assistant on Media and Publicity to the President, Garba Shehu, disclosed this in Niamey, Nigerien capital.

He spoke shortly after Buhari inaugurated the major road named after him.

Shehu said the President of Niger Republic, Mohammed Bazoun, accompanied by the Mayor of Niamey and other officials took Buhari on a tour of the 3.8km boulevard inaugurated in line with the country’s constitutional provisions.

The presidential aide quoted Buhari as expressing satisfaction with the existing bilateral relationship between Nigeria and its neighbours.

Buhari expressed the belief that such ties had helped tremendously, especially in the areas of tackling border insecurity, illegal arms import and smuggling.

Shehu said Buhari had on assumption of office in 2015 opened up strong dialogue with neighbouring Niger, Benin, Chad and Cameroon, an approach no noted resulted in positive diplomatic ties of mutual interest to both countries.

He said: “President Buhari has strong respect for our neighbours, and he understands the essence of good neighbourliness.

“Before this administration, some of these countries complained that they were not even being talked to by Nigerian leadership. We have opened up dialogue with them and it is paying off.

“We are partnering with them on essential matters, especially on security, tackling smuggling, and importation of illegal weapons, so the partnership is complete.”

The presidential aide believes that Buhari would be leaving behind on May 29, 2023 a solid relationship, built on a solid rock with Nigeria’s neighbours and expected to be built upon by his successor.

The Nigerian leader is in Niamey to join other leaders in the continent for the African Union summit on Industrialisation and Economic Diversification. 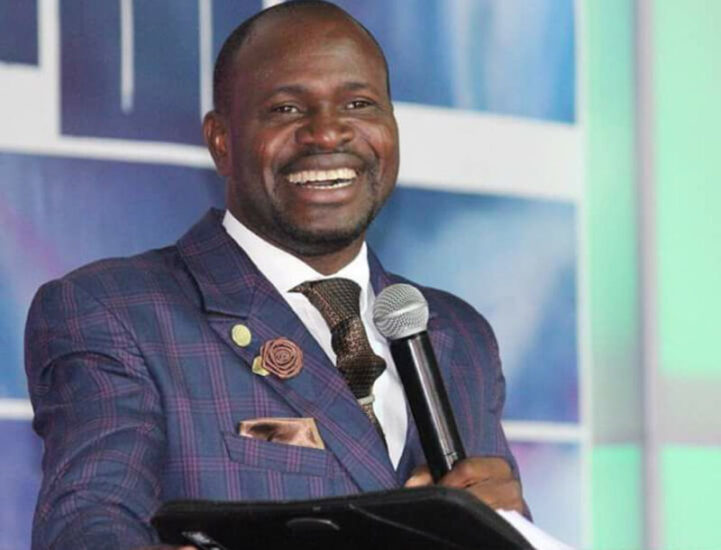 Samuel Akinbodunse, a South Africa-based Nigerian pastor, has stirred controversy in Zimbabwe with a prophecy that Nelson Chamisa, leader of the opposition party, would win the country’s 2023 presidential election.

The Pretoria-based pastor, who is also the founder of Samuel Akinbodunse Ministries, said in a Facebook video on January 4 that God told him that Nelson Chamisa’s time had come.

Chamisa, 44, lost to Emmerson Mnangagwa, the incumbent president in 2018.

Akinbodunse had said that God told him that it was not yet time for Chamisa in 2018. He told his congregants that Mnangagwa would be president.

He added that Chamisa would be victorious after several gruelling legal challenges in 2023.

“Zimbabwe. Some time ago, the Lord said to me that I should speak to Chamisa to go and be silent and that it was not yet time for him to come as president… I said that Mnangagwa was the one that God was taking in order to show Zimbabwe the way,” Akinbodunse said.

“But this time around, the Lord said to me that Honourable Chamisa’s time has come. So I see this man as the next president, but it will be very hard. It will be a battle from court to court. Many lives will be lost.

“Please write my prophecy down.”

The Nigerian pastor also said the election’s outcome would result in a lot of bloodshed on the streets of Zimbabwe.

Akinbodunse’s prophecy has, however, sparked controversy and divided Zimbabweans on social media.

While some Zimbabweans welcomed the prophecy, saying that they could not wait for it to come to pass, others questioned it.

“God has spoken. Mr @nelsonchamisa is the next President of Zimbabwe”, @alistarchibanda, a Twitter user, wrote

“‘Psalm 118:22-23 says, ‘The stone which the builders refused is become the head stone of the corner. This is the Lord’s doing; it is marvellous in our eyes. ‘Ini I believe in prophecy especially from authentic prophets like this one. So let it be for sure. Ngazvitodaro wena.’”

Believe Chikom, another Zimbabwean Twitter user, disagreed with the prophesy, saying it was a mere prediction that might end up not becoming a reality.

“Predicting is not prophesying; soothsaying is not prophesying either. A prophesy is there to warn and to caution the people to get things right with God. God sent a lying spirit to a prophet, 1 kings 22 — tell Ahab that he would win in battle against Assyria — only to have him killed,’” Chikom wrote.

“There has to be a ‘proofread’ and I am sure you knew that before making such needless declarations,” BAWSE, another Twitter user, said. 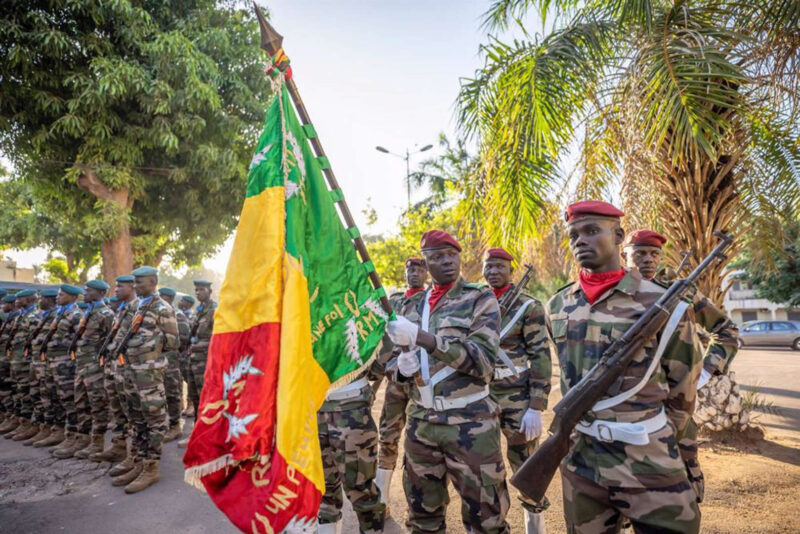 The Malian judiciary has sentenced to 20 years in prison 46 soldiers from neighbouring Ivory Coast who were arrested at Bamako airport in July after being accused by the military junta of being “mercenaries”.

The Bamako Court of Appeal also ordered the defendants to pay a fine of two million francs for the crimes of attacking the government, attacking state security and transporting arms or ammunition with the aim of “disturbing public order”.

On the other hand, the Malian justice has condemned to death for the same offenses, but in absentia, three Ivorian soldiers released last September, according to the news portal aBamako.

Ivory Coast assured that the soldiers were in Mali “as part of the operations of the logistics of the national support elements” to the United Nations Multidimensional Integrated Stabilization Mission in Mali (MINUSMA).

For his part, MINUSMA spokesman Olivier Salgado said that the detained soldiers “were not part of one of the MINUSMA contingents.” “These soldiers have been deployed for years in Mali as part of a logistical support on behalf of one of our contingents,” he stressed. 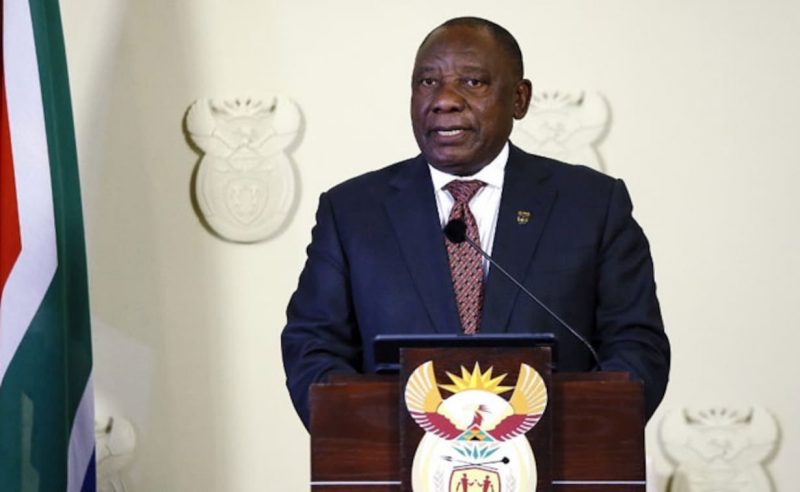 South Africa’s President Cyril Ramaphosa has been re-elected as the leader of the ruling party, the African National Congress (ANC) on Monday.

A few ANC party members of parliament (MPs) rebelled via the ballot but Ramaphosa had been widely tipped to secure re-election for a second five-year term.

However, his campaign was dogged by the Farmgate scandal that broke in June, involving large sums of foreign currency found hidden at his private game farm.

The country’s leader denied wrongdoing and has not been charged with any crimes over the scandal, but it has raised questions about how he acquired the money and whether he declared it.

Ramaphosa’s main opponent for the leadership was Zweli Mkhize, who was the health minister during the height of the Covid-19 pandemic, until Ramaphosa put him on special leave last year.