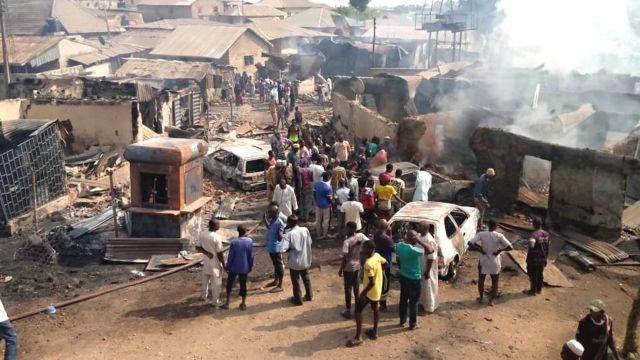 At least 35 people have been killed in three accidents in Kwara, Kaduna and Kogi states with several others seriously injured, homes and other property destroyed.

An accident at kilometre 26 of the Kaduna-Abuja Highways claimed at least 12 lives, with 25 others seriously injured.

The crash occurred on Wednesday morning involving a trailer said to be on high speed.

Kaduna State Commissioner for Internal Security and Home Affairs, Samuel Aruwan, who confirmed the accident, said the state government received the information through the security agencies.

The commissioner, who led an enforcement team on patrol, said the 25 injured travellers were receiving treatment in an undisclosed hospital just as he disclosed that an unspecified number of livestock perished in the crash.

“The Kaduna State Government has received a report from security agencies on a fatal road traffic crash which occurred this morning at kilometer 26 of the Kaduna-Abuja highway.

“Twelve (12) persons were killed in the crash, with 25 injured, who are now receiving treatment in hospital. Several livestock also perished in the accident.

“A crane was deployed to retrieve two dead bodies mutilated and trapped underneath the wreckage of the trailer.

“The scene of the crash has been cleared, and security agencies have ensured the normal movement of traffic along the route,” the commissioner said at the scene of the accident.

Aruwan quoted the governor, Malam Nasir El-Rufai, as expressing sadness over the incident and commiserated with the families of the deceased and wished those injured quick recovery.

He said the governor also cautioned citizens plying the highway to desist from dangerous and potentially disastrous practices “like speeding, overloading, reckless driving and driving against the flow of traffic, which was prohibited by the Kaduna State Government a week ago.

The commissioner also urged travellers and other road users to comply with the ban on driving against the direction of traffic.

Six people were confirmed dead and 30 homes razed when a petrol tanker exploded on Wednesday in the Gaika area of Jebba, Moro Local Government Area of Kwara State.

Spokesperson for the state’s fire service, Hakeem Adekunle, confirmed the accident but did not provide information on casualties.

It was gathered that the accident occurred at about 9am when the tanker driver driving along the popular Gaika road in Jebba, a border town, suddenly lost control.

The fully loaded tanker was said to have crashed onto a car, resulting in the explosion.

Kwara State Governor, AbdulRahman AbdulRazaq, commiserated with the families of those who lost their lives and properties in the fire incident.

A statement issued by the Chief press secretary to the governor, Rafiu Ajakaye, said, “The governor is very sad at this development especially with the loss of lives and millions of naira worth of properties and farmlands.

“He sends his heartfelt condolences to the affected families. He urges them to take heart and remain calm as believers.

“He has also directed the State Emergency Management Agency (SEMA) to quickly move in to determine the material loss.

“He also commends the Kwara State Fire Service and other responders for their efforts which helped to curtail the raging inferno and minimise the loss.”

In Kogi, about 17 people died in a road accident at Irepeni on Okene-Lokoja-Abuja highway in Kogi State.

He said that the accident, which occurred at about 5am, involved two vehicles.

Aghure said the two vehicles, a luxury bus and a Toyota Hiace, were both conveying a total of 55 passengers to different destinations when they collided.

He said 15 passengers died on the spot while two others died in hospital, bringing the total number of casualties to 17.

“The Toyota Hiace was going to Auchi, Edo State, and the luxury bus was coming from the Okene axis. The luxury bus overtook a car and in the process lost control. Of course, it was night, so it came and hit the smaller Toyota bus, pushing it into the bush.

“The vehicle somersaulted, and 15 people died on the spot and two later died in the hospital,” Aghure said.

The sector commander said 25 other passengers who sustained varying degrees of injuries were taken to a private hospital for treatment while the corpses of the 17 people were deposited at the morgue of the Federal Medical Centre, Lokoja.