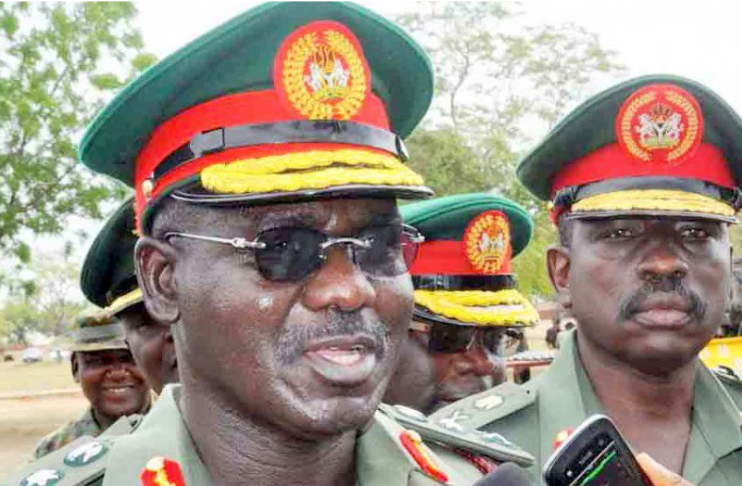 Former Chief of Army Staff, COAS, Lt General Tukur Buratai, retd, said yesterday in a tribute that the late Ibrahim Attahiru, his successor, was on the verge of making the country proud in the fight against insurgency when he died. Attahiru and 10 military officers lost their lives in an air crash near Kaduna International Airport on Friday. Buratai’s tribute came on a day indications emerged that five Major-Generals are being considered for appointment as the late COAS’ replacement. This is even as the House of Representatives weekend announced postponement of its security summit slated for today in honour of the late Chief of Army Staff and ten other military officers.

In the tribute to the late Chief of Army Staff, Buratai said: “I was deeply shocked and saddened by the news of the passing away of my immediate successor, Lieutenant-General Ibrahim Attahiru, the Chief of Army Staff, COAS, Acting Chief of Military Intelligence, Acting Provost Marshal (Army), his Chief of Staff, the Aide-de-Camp and the Acting Deputy Director, Finance in the office of the COAS, his Orderly, as well as the pilots and crew in an air crash on May 21, 2021, at Kaduna Airport.

“I would like to, on behalf of my family, reiterate my deepest sympathy and condolences to the President, Commander-in-Chief of the Armed Forces Federal Republic of Nigeria, the families of the deceased, the Honourable Minister of Defence, the Chief of Defence, the Chief of Air Staff, gallant officers, soldiers and airmen of the Armed Forces of Nigeria over the passing away of these courageous, loyal and patriotic Nigerians in line of duty. “I am deeply saddened by this incident that can best be described as tragic to all Nigerians and peace-loving people because Lieutenant-General Ibrahim Attahiru and those officers that died along with him were top-level officers whose records of service were meritorious. .

“This unfortunate incident deeply saddens me as it robbed us of the services of the Chief of Army Staff who, since he took over from me, had left no one in doubt as regards his determination to succeed in the various military operations across the country. “He was at the verge of making the nation proud in the counterinsurgency and counter-terrorism efforts when this tragedy occurred. “I do not doubt his ability as he had served under me in various capacities and was well grounded for the job with active support and collaboration of his colleagues. “While condoling the Armed Forces of Nigeria, I urge them to close ranks and make sure that their legacy lives on by consolidating on the gains made in the various operations.

“They gave their lives in the line of duty and patriotic service to the nation.” My thoughts and prayers are with the families of these great heroes. May the Almighty Allah grant them eternal rest. Amin.’’ 5 generals on consideration for COAS replacement Also, indications emerged weekend that five major Generals were being considered to replace the late Chief of Army Staff, Lt. General Ibrahim Attahiru. Sources told Vanguard that because there is no vacuum in the military and due to the fact the unfortunate crash occurred during weekend, the next COAS might by appointed by the Commander-in- Chief, President Muhammadu Buhari, latest Monday or Tuesday. According to a source in the military, the President already has five names that are being screened for the job, as all five had performed creditably in their current positions.

The list is said to include two serving General Officers Commanding, GOCs, a former Force Commander, Multi-National Joint Task Force, a Corps Commander and another Major-General and former GOC who was redeployed by the late COAS. Though the source declined giving more details that will narrow down the officers involved, Vanguard gathered that the Generals involved are Course 37 and 38 officers because by statute, since late General Attahiru was Course 35, his seniors are expected to either retire or get redeployed to Defence headquarters. On assumption of office as Chief of Army Staff, many of former COAS (Lt. Gen Tukur Buratai’s) course mates and seniors to General Ibrahim Attahiru were either retired or redeployed to the Defence headquarters, or the Nigerian Army Resource Centre as directing staff/senior fellows.

However, by tradition, the next most senior officer to the late Chief of Army Staff is the Chief of Policy and Plans, Nigerian Army, a position currently held being held by Major- General Benjamin Ahanotu from Anambra State. He superintended the burial ceremony of his former boss, Attahiru and is expected to act in the interim, pending appointment of a substantive Chief of Army Staff by President Muhammadu Buhari. Reps shelve planned security summit Similarly, the House of Representatives has postponed its security summit slated for Monday, in honour of late Chief of Army Staff, Lt. Gen. Ibrahim Attahiru and ten other military officers.

Announcing the postponement through its clerk, Mr. Chinedu Akubueze, in a statement yesterday, the House said:  “This is to inform the general public that the House of Representatives has postponed its national summit scheduled to hold from Monday, May 24, 2021, in honour of the late Chief of Army Staff (COAS), Lieutenant-General Ibrahim Attahiru, and 10 other military officers and men that died as a result of air mishap on Friday.

“The security summit will now kick off on Wednesday, May 26, 2021.  The House shares in the grief and sorrow of the families of the late top military officers and prayed that the Almighty God will grant them eternal rest. “It should be noted that the postponement became necessary as the late Army Chief was one of the major stakeholders that would have taken part in the summit. The House regrets any inconvenience the postponement may cause invited guests,” a statement from the office of the Clerk stated.

CAN youth wing declares 3-day mourning Meanwhile, the youth wing of Christian Association of Nigeria, CAN, has declared a three day mourning over the demise of  Chief of Army Staff, Lt. General Ibrahim Attahiru and other officers who died in a military plane crash in Kaduna. Belusochukwu Enwere, the national chairman of CAN’s youth wing, disclosed this in a statement in Abuja yesterday. He also demanded an extensive inquest into military plane crash; describing the incident as a colossal loss to the nation. According to him, Attahiru and the other officers are heroes who gave their lives for the security of the nation. He said: “The entire Christian Youths in Nigeria are grieved by the death of the Chief of Army Staff, Lt. General Ibrahim Attahiru and other military officers.

“Attahiru and the other officers are heroes who gave their lives for the security of our nation. The tragic incident is a colossal loss to Nigeria “Starting from today (Sunday), we shall observe three days mourning for our fallen heroes. YOWICAN urges the Federal Government to do same because these men are risking their lives to secure our nation. “As we announce a three-day national mourning, we demand an extensive inquest into this military plane crash and must be followed to the last.

“This is a tragedy too much to bear. Our country has passed the stage where military aircraft will crash like that and we call it normal. “In less than one year, two military aircraft  crashed for nothing without solid investigations.  This will surely affect the security of our nation and the war against insurgency, banditry, and kidnapping. “President Muhammadu Buhari must do something about this before it is too late. Who knows who is next? It could be the President, a governor, Senator, military officers or ordinary citizens. “We commiserate with the military high command, the families of Lt. General Attahiru and the other officers and men who have paid the supreme price for the security of our nation. We pray God Almighty to give them the fortitude to bear this irreparable loss.”