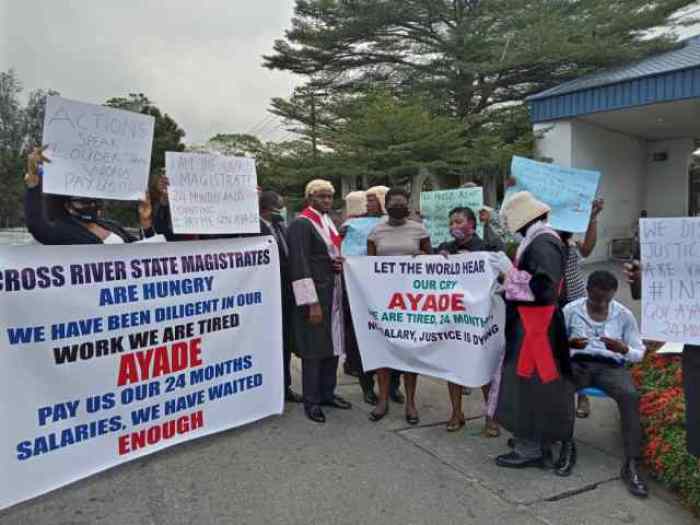 There was apprehension on Tuesday in Calabar, Cross River State, when one of the 30 magistrates protesting non-payment of their 24-month salary collapsed in front of the Governor’s Office.

The magistrate, Richard Edet, was later revived by his colleagues.

Cross River State Deputy Governor, Prof Ivara Esu, was said to have driven past the protesting magistrates when the magistrate collapsed.

Many of the magistrates employed by the Cross River State Government two years ago had come to the Governor’s Office in their full regalia for the protest.

The protest began on Monday by Safiya Iyeh Ashipu, Chief Magistrate Court in Odukpani as a lone protester with her two children.

The magistrates were demanding the payment of the two-year salaries owed them by the state government.

They claimed they had not been paid since their employment into the state civil service by the Governor Ben Ayade administration.

A total of 45 were said to have been employed by the state government, with 30 of them were absorbed from private practice and 15 others drawn from the Ministry of Justice.

Speaking on behalf of the magistrates, Solomon Abuo, said no government official had addressed them since they began the protest.

According to him, they have been tossed around for the past two years and nothing concrete has come from the government.

“As I speak, we are still working. We will continue to protest until we are paid. This is our last resort,” he said.