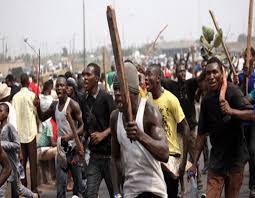 Oyo State Government has shut Shasha market in Ibadan indefinitely and imposed a 24-hour curfew as the clash between the Yoruba and Hausa youths which started Friday in the market continued on Saturday.

The decision, according to Governor Seyi Makinde, follows the continued killings and destruction of property in the market.

At least one person was killed on Friday and several others injured in a clash between some Yoruba youths and their Hausa counterparts in the market.

The clash, which resulted in many vehicles being vandalised, shops razed and houses destroyed,  continued Saturday morning with youths unleashing mayhem on one another.

Many residents of the area were said to have fled the place Friday night for fear of being attacked overnight.

Unconfirmed sources said the clash, which had extended to the other parts of market, had claimed three lives. But the Oyo State Police Command said only one life was lost.

In announcing the curfew, the governor said the decision was aimed at urgently restoring peace to the area.

Governor said the order was to forestall a breakdown of law and order in the area, adding that the curfew on Shasha and the market area was from 6pm to 7am.

He warned residents of the affected area to go about their legitimate business peacefully, stating that anyone found perpetrating violence would face the wrath of the law.

Adisa said, “Governor Seyi Makinde has directed the immediate closure of Shasha market indefinitely following reports of a breach of peace in the area.

“The governor has also approved the imposition of a curfew on Shasha. It will run from 6pm to 7am.

“Residents of the affected area are enjoined to go about their legitimate business within the hours stipulated by the law.

“Anyone caught disrupting the peace of the community will be made to face the wrath of the law.”

Sources said despite the deployment of police and security agencies in the area, some groups razed the market overnight, destroying shops, kiosk and wares of some traders.

The source said security operatives deployed in the area could not do much as they were only stationed by the main road while the market kept on burning.

The Yoruba youths were said to be hell bent on avenging the death of a cobbler after he was reportedly hit with charm by a Hausa cart pusher.

Amid the fear of an ethic uprising, many residents of Shasha community on Friday relocated from their homes to neighbouring communities.

Although the police said on Friday that critical stakeholders had been consulted to appeal to the people, the situation reportedly degenerated on Saturday morning.

Related Topics:FeaturedMakindeShasha market Ibadan
Up Next