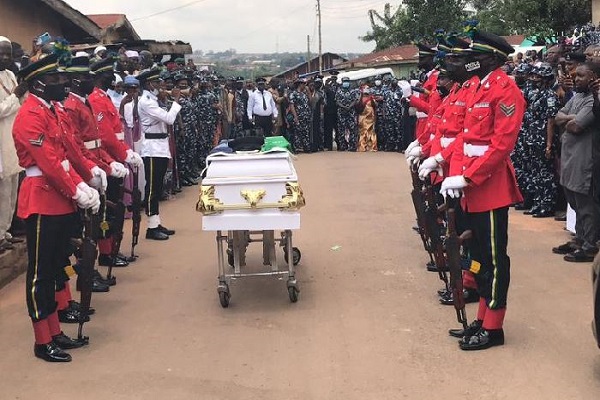 The Nigeria Police has honoured the late Chief Superintendent Kazeem Abonde with a colour parade on Friday in Lagos.

The lying-in-state was held at the State Force Headquarters in Ikeja before the body was transported to Oyo State.

Abonde was killed on September 23 in Ajao Estate, Lagos State when he led operatives to implement the Lagos State Government’s ban of okada riders.

The motorcycle operators fought back, burnt police vehicles and chased away the personnel.

But Abonde was isolated, allowing the attackers the chance to strike.

The CSP, whose head was smashed, died in a pool of blood before emergency services reached him.

The Centre for Social and Economic Rights condemned the murder in strong terms and demanded a thorough enquiry.

Abonde was reportedly preparing to retire from active service in 2022.

Having bagged a law degree, he planned to open a law firm after he retired.

The Lagos State Governor, Babajide Sanwo-Olu, assured that the perpetrators will face justice.

Sanwo-Olu said: “Such display of savagery as the one in which CSP Abonde died will not be allowed no matter the circumstances.

“The law is there for us all, should there be a need to redress any perceived wrongdoing.

“Citizens who take the law into their own hands are promoters of jungle justice, which will not be allowed to take root in our dear Lagos.”