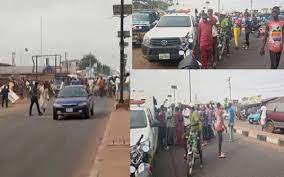 The police have restored peace and order after violence erupted on Wednesday in some of the mission schools over the use of Hijab by Muslim female students.

The violence followed the announcement by the state government to reopen the schools closed since February 19.

Three persons were said to have sustained injuries during the clash.

The Police Public Relations Officer (PPRO) in Kwara State, Mr Ajayi Okasanmi, said the Commissioner of Police, Mohammed Bagega, had deployed personnel to ensure that peace in the town.

“The situation grew worse as angry Christian and Muslim faithful started throwing various objects such as stones, plastic chairs and empty can drinks at themselves.

“The security operatives deployed there called for reinforcement to calm the situation and the situation has been brought under control.

“Peace and order has been restored in the affected schools and everyone is now going about their normal activities,” the PPRO said.

The Christian Association of Nigeria (CAN) says the Kwara government should be held responsible for the Hijab crisis rocking the state.

In a statement, CAN general secretary, Joseph Daramola, said the swift reopening of the schools was responsible for the resurgence of the religious crisis.

He said the state government failed to address the underlining issues before taking the decision, and asked the Federal Government to intervene into the matter.

“We learnt that the State Government has ordered the reopening of the closed schools without resolving the crisis,” CAN said.

But the Kwara State Government said in a statement on Wednesday that the use of Hijab in public schools was not mandatory, adding that Muslim schoolgirls willing could put on the headgear.

It stated, “It is important to clarify that the government is not imposing the hijab. It is not mandatory for all our schoolgirls to wear Hijab,” it said.

“Rather, the state government approves Hijab for any Muslim schoolgirl who wishes to use it. The government is only respecting the fundamental human right of those schoolgirls; nothing more.

“This has been communicated to all school heads via a circular of the Ministry of Education and Human Capital Development.”