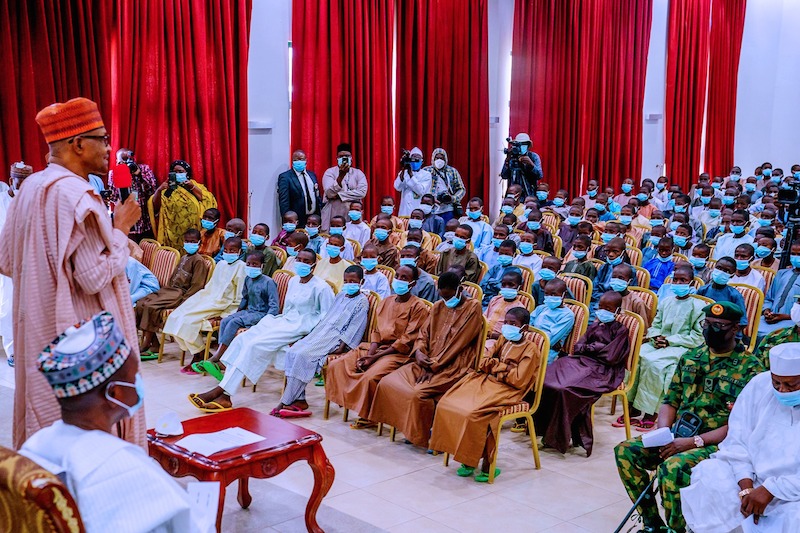 He made the appeal on Friday when he met with the 344 students at the Banquet Hall of the Government House in Katsina.

The President said they should remain focused in pursuing their interest in acquiring good education, despite the misfortune of kidnapping.

He said, “If I wasn’t educated, I will not be standing here today in front of you. I schooled in Katsina for nine years. I moved on to join the army, served as a governor, Head of State, went to prison, came out, and later joined politics.

“I contested presidential elections three times, and finally I was declared a winner in 2015.

“My dear children, don’t be discouraged with what has happened; give your attention to acquiring knowledge and developing good character, and you will be distinguished in life. I know that you have been through a lot.

“The suffering you went through, please put it aside, and try to forget the painful experience. There is no substitute for a good education, so you must return to school and continue.”

Buhari said the unfortunate incident was a test of character and determination to succeed in life.

He said the Federal Government would upgrade the security structure in the country to ensure the safety of everyone.

Related Topics:BuhariFeaturedKankara schoolboys
Up Next 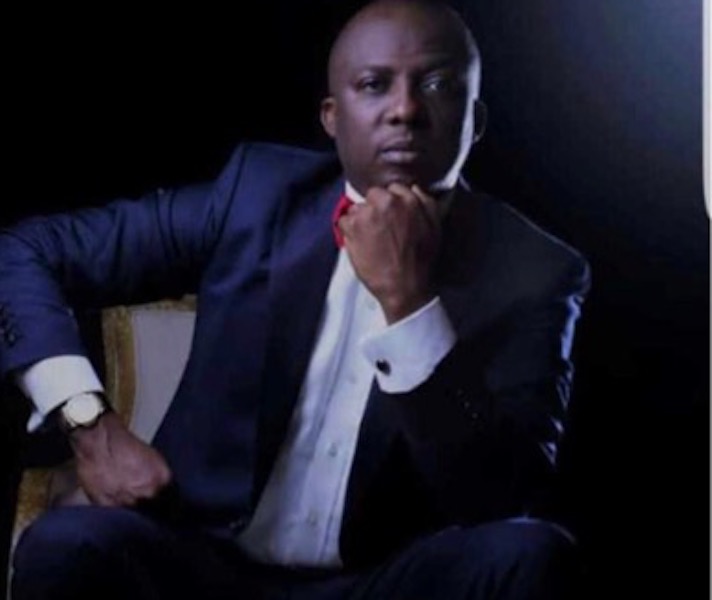 President Muhammadu Buhari is set to confer a national honour award of the Commander of the Order of the Federal Republic on a 48-year-old medical doctor, industrialist and celebrated entrepreneur, Dr Eruani Azibapu, becoming the youngest Nigerian to receive the CFR award.

Eruani, who is the chief executive officer of Azikel Refinery, is to get the award for his immense contributions to Nigeria’s economic growth, employment and national development, according to the letter conveying the national award to him.

The conferment notice was signed by the Minister of Special Duties and Inter-Governmental Affairs, Senator George Akume.

At 35, he had set a record, buying his first helicopter, having turned a billionaire at 34. Graduating as a medical doctor at 27, he later became the youngest commissioner for health (Bayelsa) in the country.

From the business of selling sand, he later diversified into aviation and now, petroleum, working to build the first functional private refinery in Nigeria.

The CFR award, according to the letter, will be formally conferred on him at a ceremony scheduled for Tuesday, October 11, 2022, at the International Conference Centre, Abuja.

Born on December 25, 1973 to the royal family of King Allwell Eruani, Aguda IX, the Obenema of Emadike Kingdom in Bayelsa State, the philanthropist obtained his Bachelor of Medicine and Bachelor of Surgery (MBBS) from the University of Port Harcourt in 1999.

Eruani pioneered the establishment of in-country petroleum refining by setting up the first private Hydroskimming Refinery in Nigeria.

With an output of 25,000 barrels per day, Azikel Refinery brings to reality President Buhari’s Modular Refinery Regime launched in 2015.

His business interests, which started with dredging and sandfilling, include power, aviation, oil and gas and technology.

On graduation, he worked as a medical officer in the civil service and some private clinics in Port Harcourt,  and later sought further education and specialisation, starting in surgery at the University of Port Harcourt Teaching Hospital, then travelled to the United States (US) and took interest in family medicine and later became a member of the American Academy of Family Physicians.

Azibapu also worked in Bayelsa State as a medical officer. But when he became a member of the American Academy of Family Physicians, he secured employment in Nigerian Agip Oil Company as an expatriate, basically providing occupational health services. He rose to the level of a deputy chief industrial doctor.

Then, there was clamour for him to come back, as the government of Bayelsa State needed some experienced doctors to revive its health sector.

The then governor, and later President, Dr. Goodluck Jonathan, appointed him as adviser on HIV/AIDS and Community Health and he was appointed commissioner of Health by Chief Timipre Sylvia, who took over from Jonathan.

After serving as adviser for about two years and commissioner for about five years, he went into an area that was considered not befitting, the business of sand selling.

At the outset, not many people wanted to work with him. In fact, when he told his mother that he wanted to go into selling sand, she wept, that her son and only child, a medical doctor of international repute and commissioner was going to start selling sand.

But Azibapu had always known that one could actually make a good business from what many people didn’t like. And he found encouragement in his father, who said he believed in whatever he wanted to do. 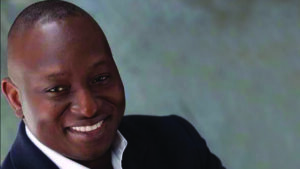 “I needed to get land by the riverside. I could go to a community to get land and even if I cannot pay at once, I can pay overtime, and that was what I did. I went and discussed with the Otuogori community and they agreed. That is where my operation is based, more so, it was a vacant land then, as it was always submerged under water.”

Solving the problem of dredging machine was more challenging, as he didn’t have the money to rent a dredging machine, let alone buy one. “So, I approached someone I know has a dredging machine, who remains very famous in my history, called Akpe. I asked if he could pump some sand for me, and he agreed to do so if I was willing to pay.

“From the bill he gave me, I needed an initial deposit of about N80million. I didn’t even have up to N10million. I tried to bargain as much as I could, but it wasn’t forthcoming, so I accepted it, despite not having the money.

“But I said since he wouldn’t need the whole N80 million at once, we should have a payment plan and I proposed N80 million to dredge about 100 feet of sand and offered to pay him N5 million deposit to mobilise a dredging machine to the site.

“I was able to muster about N10 million, so while he was there, I could pay him another N5 million. So, when he pumped the sand and we quantified that it was worth N10 million, I paid another N10 million,” he recalled.”

Asked how he hit it at an early age, Azibapu explained: “It is influence, largely environmental influence. The environment is not where you grow up; it is the people that you meet, your perception and the people that are around you. When you are purposeful and you have success written around you, you are likely to succeed.”

Today, Azikel operates in Bayelsa, Delta and Rivers states. The business soon evolved into a multinational industry and there was the quest to diversify, this time into the aviation sector, starting with a small aircraft. 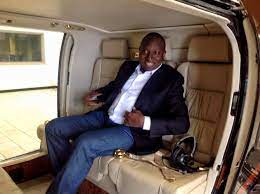 -Additional report by the Guardian 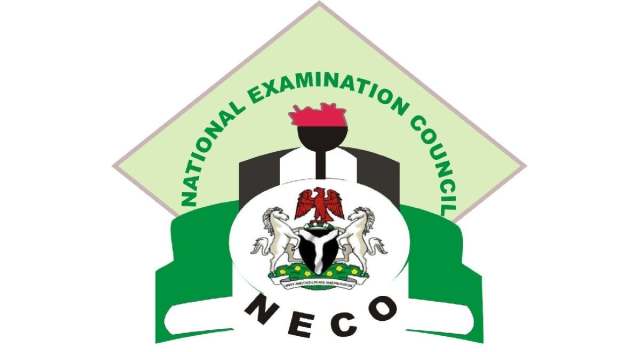 The National Examination Council (NECO) has released the results of the 2022 Senior Secondary School Certificate Examination (SSSCE) conducted nationwide in July, with over 60 per cent of the candidates scoring credit in five subjects including English and Mathmatics. 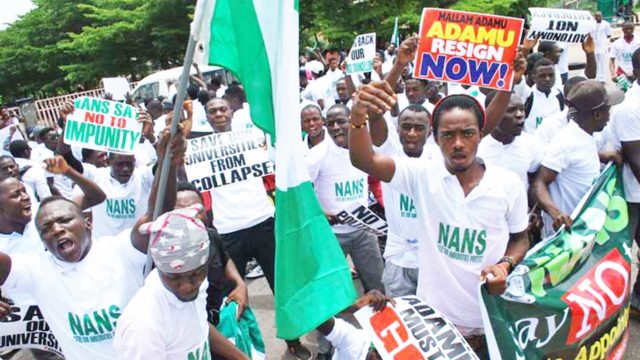 The National Industrial Court sitting in Abuja, on Tuesday, struck out a suit the National Association of Nigerian Students, NANS, filed to compel the Academic Staff Union of Universities, ASUU, and the Federal Government to call off the ongoing strike action.

Justice Polycarp Hamman terminated further proceedings in the matter, after it was withdrawn by factional President of NANS, Umar Faruk Lawal.

Lawal had told the court that he filed the suit marked NICN/ABJ/273/2022, for himself and on behalf of NANS.

Aside from ASUU which was cited as the 1st Respondent, the Minister of Education and the Attorney-General of the Federation were listed as 2nd and 3rd Respondents, respectively.

When the matter came up on Tuesday, Lawal told the court that he had filed a motion for discontinuance.

He said the decision to withdraw the suit was on account of the challenge by the student body which contested his standing.