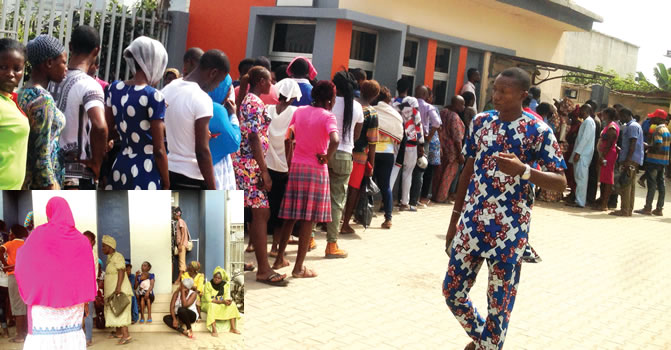 Despite extension of deadline for the circulation of old N1,000, N500 and N200 notes to February 10, bank customers continue to face frustration, as ATMs were largely empty across the country.

The few that had the new naira notes had very long queues, with customers standing for many hours to take their turns. Even after queuing, some returned home empty-handed as available cash in ATMs was exhausted.

This is as traders in many markets at the nation’s commercial capital of Lagos have refused to accept old naira notes from customers for fear of recording losses in their operations.

Traders, who spoke to The Guardian, demanded that the Central Bank of Nigeria (CBN) and the Federal Government increase availability of the new notes to mitigate hardship.

According to a trader at Oshodi market, Chima Nnadozie, “people still have the old notes and they are finding it nearly impossible to deposit them in the banks due to congestion and overcrowding. That is why some of us decide not to collect the old money again until the new notes are available and easily accessible to all.”

Point of Sales (PoS) operators were, yesterday, in brisk business, as they charged 10 per cent for withdrawals. For instance, anyone who withdrew N10,000 new notes, was charged N1,000; while old notes attracted between N200 and N500. Most operators said they did not have new notes to dispense to customers.

According to a Point of Sale (PoS) operator, Femi Akande, customers who came to withdraw from his stand refused to accept old notes as they preferred new ones

“If customers come to withdraw money and you give them the old notes, they no longer accept it, because they are afraid traders won’t accept it from them,” he said.

A customer said he had queued at two different ATMs, belonging to different banks, but could not withdraw any money because the notes were exhausted before it was his turn.

He said even his attempt to withdraw old notes at the counter did not yield positive results, as he was told that banks were instructed not to pay old notes of the affected denominations.

It was gathered that banks that had bank notes could only dispense the N100 and N50 denomination and pegged Over The Counter (OTC) withdrawals at only N10,000 per customer.

A bank official said they were under strict directives of CBN not to pay any customer more than N10,000 of the lower denominations.