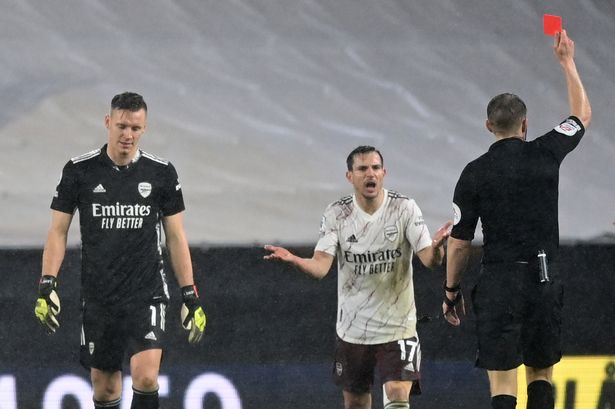 David Luiz and Bernd Leno were sent off as nine-man Arsenal imploded to hand Wolves a 2-1 victory at Molineux on Tuesday.

Arsenal were seconds away from going in ahead at the break, thanks to Nicolas Pepe’s solo strike, but things turned sour in first-half stoppage time when Luiz was shown a straight red card for bringing Willian Jose down in the box and Ruben Neves levelled from the penalty spot.

Joao Moutinho’s stunning first Molineux goal swung the momentum in Wolves’ favour two minutes after the restart, and the game was put beyond the Gunners 18 minutes from time when goalkeeper Leno was given his marching orders after inexcusably handling the ball outside his area.

Pierre-Emerick Aubameyang had a late chance to snatch a point for Arsenal but their seven game unbeaten run came to an end as Wolves held on for a vital first victory since December 15, which sealed a first league double over the Gunners since the 1978/79 season.

Arsenal arrived at Molineux unbeaten in seven and were confident and dominant from the outset as they nearly put the game beyond Wolves’ reach inside the opening 10 minutes.

With barely 45 seconds on the clock, the returning Bukayo Saka latched onto Thomas Partey’s eye-of-the-needle pass, only to see his left-footed drive cannon back off the post.

After drawing Rui Patricio into a decent save, Saka thought he had given Arsenal an overdue lead with a clinical shot into the far corner, but Alexandre Lacazette was found to have been offside in the build-up.

Having nearly been blown away early on, Wolves established a foothold in the game, albeit without creating clear-cut opportunities, but Arsenal still posed a threat whenever they ventured forward.

A stunning fingertip save from Patricio diverted Pepe’s near-post drive onto the bar on 25 minutes, but the Gunners were not to be denied much longer as their next meaningful attack yielded the breakthrough.

Pepe capitalised on poor defending from Nelson Semedo and Neves, skipping past two weak challenges before curling an unstoppable effort into the top corner.

That looked to have secured Arsenal a deserved half-time lead until Luiz’s costly trip on Willian Jose as he raced through on goal. The Brazilian was shown a straight red card and the Gunners’ triple jeopardy was sealed by Neves’ ruthless finish into the top corner.

With the whole dynamic and complexion of the game turned on its head, Wolves needed little time to take advantage as Moutinho – at the 61st attempt – scored his firsts home goal for Wolves with a spectacular 30-yard drive than cannoned in off the post.

Arsenal still posed a threat to Wolves’ one-goal lead but their task turned insurmountable on 72 minutes when Leno raced out of his area to prevent Adama Traore gathering a long ball and, in a moment of madness, punched the ball out of play.

Referee Craig Pawson was forced to brandish the red card for a second time after the deliberate handball, and despite Aubameyang’s late blocked chance, there was nothing Arsenal could do to deny Wolves a first win of 2021.

Wolves registered their first win in nine Premier League games (D3 L5), since a 2-1 victory over Chelsea in December.

Arsenal suffered their first defeat in eight Premier League games (W5 D2), conceding as many goals against Wolves as in their previous seven in the competition (2).

Wolves completed their first league double over Arsenal since 1978-79.

Since Mikel Arteta’s first game in charge of Arsenal on Boxing Day 2019, the Gunners have been shown nine Premier League red cards, six more than any other side.

Arsenal winger Nicolas Pépé has scored in three consecutive away league appearances for the first time since January 2019, when he scored in four in a row on the road for Lille.

Since making his Premier League debut for Arsenal in August 2019, David Luiz has picked up more red cards (3) and conceded more penalties (6) than any other player in the competition.

João Moutinho scored his first home goal for Wolverhampton Wanderers in all competitions (61 games at Molineux), while all three of his Premier League goals have come from outside the box.

Bernd Leno became only the second Arsenal goalkeeper to be sent off in the Premier League, after David Seaman in November 1993 against West Ham.

What the managers said

Wolves boss Nuno Espirito Santo: “It’s a very welcome win, it means a lot. We are in a tough moment and it is important. We did many beautiful things in the past seasons and we want to emulate them again.

“The game was very difficult, Arsenal played some very good football; they broke, counter-attacked, had possession, it was a tough first half.

“Every changed with the penalty, the dynamic of the game changed. The referee didn’t have any other option [but to show a red card] in both situations.”

Arsenal head coach Mikel Arteta: “I’ve seen the replay [of David Luiz’s red card] 10 times from five different angles, and I cannot see any contact. I would like to see if VAR have different angles. I don’t want to think that [the decision was made on David Luiz’s reputation] I’m sure they made the decision based on seeing something. I was expecting to see something but didn’t see anything.

“I am super proud about our team, the way we played and how we dominated in the first half. We should have been three or four goals up, we didn’t do that, and then we put ourselves in a really difficult position conceding a goal and going a man down.

“The way we lost the game really hurts, it’s painful But I have to take the positives from the way the team is evolving, the way the team played against this opponent and the amount of chances we created.”