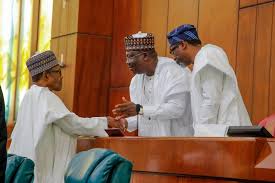 President Muhammadu Buhari has commenced moves to replace the Economic and Financial Crimes Commission (EFCC) with a new body, Proceeds of Crime Recovery and Management Agency.

President of the Senate, Ahmad Lawan, who read a letter from President Buhari on the proposed bill tagged: “Proceeds of Crime Bill”, said it would address the problem of lack of transparency and accountability associated with the management of recovered funds by anti-corruption agencies in the country.

In the letter, Buhari said the transmission of the piece of legislation to the National Assembly for consideration followed its approval by the Federal Executive Council.

According to the letter dated October 6, the agency would be critical in sustaining the fight against corruption, money laundering and illicit movement of stolen funds through the banking system and across Nigerian borders.

“An important feature of the bill is the creation of the Proceeds of Crime (Recovery and Management) Agency. The objectives of the agency include the enforcement and administration of the provisions of the bill and the coordination of the recovery and management of the proceeds and instrumentalities of unlawful activity in Nigeria in all collaboration with anti-corruption and other law enforcement agencies.

“Most importantly, the agency will ensure that Nigerians can benefit from proceeds of crime by ensuring that once recovery is made, the properties and assets will be secured and that the final forfeitures granted through a court order can be paid into the Confiscated and Forfeited Account to be domiciled in the Central Bank of Nigeria.”

If signed into law, the bill will stop the EFCC and six other anti-corruption agencies from securing freezing orders on suspicious bank accounts under investigation.

The other agencies are the Independent Corrupt Practices and Other Related Offences Commission (ICPC); National Drug Law Enforcement Agency (NDLEA); Nigerian Financial Intelligence Unit (NFIU); National Agency for the Prohibition of Trafficking in Persons (NAPTIP); Code of Conduct Bureau (CCB) and the police.

“The Proceeds of Crime Bill is essential and critical in building and enduring and sustainable foundation for the fight against corruption, money laundering and illicit movement of stolen funds through the banking system and across the Nigerian borders. The bill will also improve the ability of law enforcement agencies to seize, freeze, and confiscated stolen assets in Nigeria while observing all related constitutional and human rights laws,” the President said.