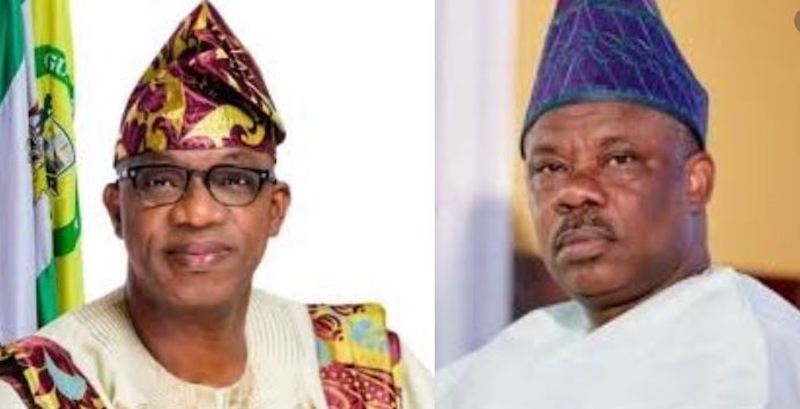 A former Ogun State Governor, Senator Ibikunle Amosun, has accused his successor, Governor Dapo Abiodun, of rigging his way into power during the 2019 governorship election in the state. Amosun, who finally broken his silence over the 2019 governorship election, claimed that his preferred candidate, Adekunle Akinlade, who contested on the platform of the Allied Peoples Movement (APM), won the election but was rigged out.

The former governor made the claim while speaking on Friday evening in Abeokuta after receiving an award from the Abeokuta Club to commemorate the 50th anniversary of the association. Amosun, at the event, which  also had former Governor Chief Olusegun Osoba in attendance, said he was not in support of Abiodun’s administration and declared that all efforts must be made to vote the government out of power in 2023.

The former governor, while speaking on the 2019 Ogun State governorship election for the first time after leaving office, noted that some of those involved in the rigging process, have disclosed their parts in the plot and apologised.

He added that he had moved on because those, who orchestrated the rigging have apologized to him. “During the last election, thank God, Chief Osoba is here. I have said it. We won convincingly.

They rigged, rigged, and ended up with 19,000. “Some of them came to apologise to me. I can’t be mentioning names.

We won that election. But I have moved on. “We did our work. We will continue to do what we have to do. God will be with all of us,” the former Governor said. Speaking later in an interview with newsmen, Amosun declared that he was not in support of Abiodun’s administration, saying he must be removed. He also assured his supporters that the next line of action would soon be made public. He said: “Well, I am happy. When you are in a place and they are telling you that you have done the work of four or five governors altogether, I feel elated. I am happy that they appreciated our little efforts. “Just wait!

Very soon, you will hear where we are going next. Clearly, you know my stand, and my stand is my stand. I am not supporting this administration that is there now. He must be removed,” he said.

But the All Progressives Congress (APC) in Ogun State faulted the claims of Amosun. But, reacting to the allegation, the state chapter of the APC said, Amosun’s outburst was an indication that the former governor is “suffering from political amnesia and out-of-office loneliness.”

The party, in a statement issued in Abeokuta yesterday by its Publicity Secretary, Tunde Oladunjoye, described, Amosun’s claim as “an afterlunch belching of a man suffering from political amnesia and loneliness.” The statement reads: “The attention of our party has been drawn to a statement reportedly credited to the immediate past governor of Ogun State and the Chief Promoter of the Allied Peoples Movement (APM), His Excellency, Senator Ibikunle Amosun.

“The quoted statement was not only an insult to the psyche  of the people of Ogun State but also a sad indication that the former governor is yet to purge himself of extreme arrogance and intolerance that were his trademarks, which earned him suspension from our party, even as a sitting governor. “The APC, therefore, calls on the general public, and particularly our esteemed members, to pity and pray for the former governor as he obviously suffers from political amnesia, loneliness and absolute lack of touch with reality.

“There is absolute no truth in the specious utterance of the former governor, who is obviously still sulking from the electoral defeat of his surrogate party in 2019. Our party and candidate not only won fair and square, the victory of Prince Dapo Abiodun was also attested to by his cocontestants, many of whom later joined APC and are still in APC.

“Never in the history of governorship elections in Ogun State have candidates of other parties so instantaneously congratulated and visited the Governor-elect, as it happened in the case of Governor Dapo Abiodun, whose Iperu country home hosted candidates and leaders of other parties, including late Prince Buruji Kashamu, Otunba Rotimi Paseda, Mr. Gboyega Nasiru Isiaka (GNI), and Otunba Gbenga Daniel, among others.

“It is on record that many of the then opposition figures like former Deputy Governor of Ogun State, Alhaja Salmat Badru; the deputy governorship candidate of the Peoples Democratic Party (PDP), Mr. Rueben Abati, GNI and others served in the Economic Transition Committee chaired by Mr. Tunde Lemo, which was set up by Prince Dapo Abiodun immediately after the elections. “As provided for in a democracy, the candidate of the Allied Peoples Movement challenged the results of the election at the Governorship Election Petition Tribunal in Abeokuta and lost. His ramshackle petition was dismissed.

While confirming the victory of Governor Abiodun at the Saturday, March 9, 2019 election, the tribunal led by Justice Yusuf Halilu, in its judgment, stated that: “This petition does not only fail, it is destined to fail, it fails and hereby dismissed.”

“Not satisfied, the APM and its candidate went on appeal at the Court of Appeal, Ibadan and later at the Supreme Court where they also lost. It is remarkable that in all the petition and court cases, the judgements were unanimously passed without any dissenting voice from the Tribunal members and the judges at the Court of Appeal and Supreme Court.

We recollect vividly that it took the support of Prince Dapo Abiodun and the open appeal of our father and leader, Chief Olusegun Osoba, who pleaded during his visits to all the wards in Ogun Central Senatorial District that our members should consider the interest of the party by voting for Amosun.”

In his reaction, Abiodun said he would not be distracted by self-delusional person The governor noted that “Ogun State is not anybody’s father’s inheritance”.

All I can say is that what we stand for in Ogun State is administration that is committed to providing purposeful leadership and purposeful infrastructural development across the length and breadth of the state,” he said.