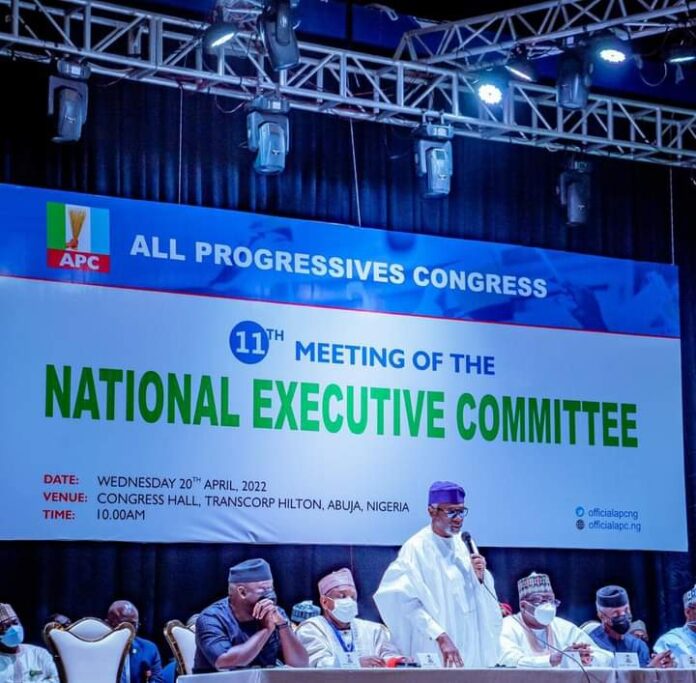 The All Progressives Congress says it will choose its presidential candidate for the 2023 poll through an indirect primary election.

The decision was reached at the party’s 11th National Executive Committee meeting held on Wednesday in Abuja.

President Muhammadu Buhari and other leaders of the party also transmitted their powers to the National Working Committee of the APC to make decisions for a period of 90 days.

Meanwhile, the party has released its primary election timetable for various public offices ahead of the 2023 elections.

The timetable was released by the party after its NEC meeting in Abuja.

The party’s presidential candidates are expected to pay N100 million to buy the nomination form while the governorship candidates will pay N50 million.

The price of nomination form for state house of assembly was pegged at N2 million while the House of Representatives is N10 million and the Senate is N20 million.

According to the schedule, a notice of election to state chapters would commence on April 22.

The party said the sale of forms for the various public offices will begin from April 23 to May 6.

It said the congress to elect state and national delegates would be held between May 7 and 9.

The ruling party said aspirants for the state house of assembly and governorship will be screened on May 12.

The party said it would screen aspirants for positions of state house of assembly and governorship on May 14; House of Representatives and Senate on May 17; and presidential aspirants on May 23.

The primaries for governorship, state house of assembly, House of Representatives, and Senate will be held on May 18, 20, 22, and 24 respectively.

No date has been fixed for the presidential primary election.

Related Topics:APCFeaturedPresidential Primary
Up Next