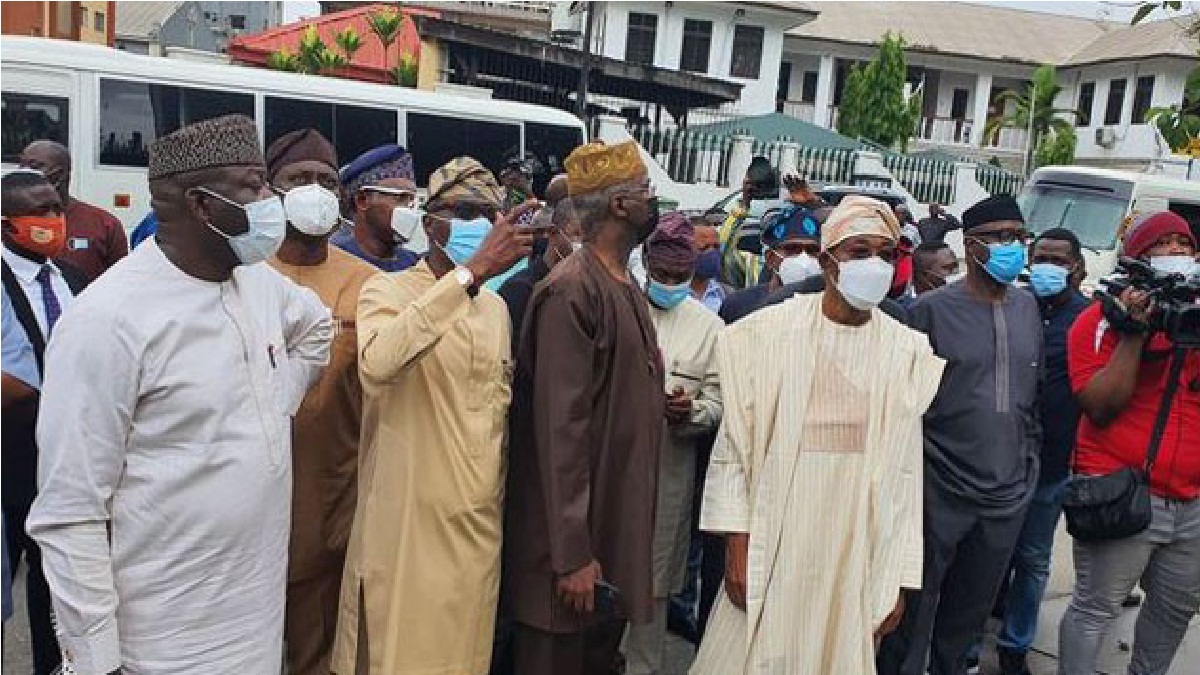 South-West governors, accompanied by three ministers, on Sunday paid a visit to Lagos State Governor Babajide Sanwo-Olu over the looting and burning of public property and institutions last week by suspected hoodlums.

The South-West governors led by its chairman, Rotimi Akeredolu, as well as the ministers commiserated with families of those that lost their lives and properties in the coordinated attacks.

They expressed shock at the extent of the destruction of public assets and private property by hoodlums in Lagos State, noting that the coordinated attacks on the state were an attempt to weaken the economy of the South-West region for some political reasons.

Sanwo-Olu took the governors and ministers round on an inspection of some vandalised areas, including Igbosere High Court, City Hall, DNA and forensic centre.

Akeredolu, who spoke at a joint press conference after the tour, likened the Lagos attack to a war zone, given the monumental destruction.

He said, “The regression into savagery exposed South-West’s vulnerability to manipulation by divisive elements bent on annihilating the region’s economic prosperity and destroying its common heritage.

“We are deeply concerned with the ease with which public buildings, utilities, police stations and investment of our people have been burnt despite the proximity of security agencies in those areas. The development leaves us with no other option than to believe that there may be other reasons for continued protests, well-coordinated and funded.

“We are particularly worried that 48 hours after the unfortunate incident at the Lekki tollgate by persons adorning military outfit, there has been no definitive statement from the military authorities on the incident. Our anxiety becomes heightened by the categorical denial of the Governor of Lagos State concerning the military deployment. No governor has powers to authorise deployment of military personnel in Nigeria.”

Minister Fashola also said the visit was at the instance of President Muhammadu Buhari, noting that words were not enough to describe the extent of the destruction wreaked by the arsonists.

He hailed Sanwo-Olu for his “untiring effort” to restore peace in the state, cautioning those posting inflammatory comments on the social media to desist from the act.

The minister called on all Lagos residents to unite and collectively address the cause of the violence.

Related Topics:FeaturedSanwo-OluSouth west
Up Next

My dad is not Nigeria’s problem -Buhari’s daughter