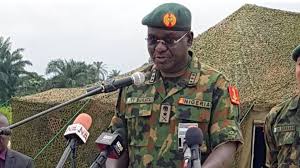 The Chief of Army Staff, Lt. Gen. Tukur Buratai, has ordered officers and soldiers of the Nigerian Army not to spare but deal promptly and decisively with anyone attempting to kill any security personnel or destroy public property.

Buratai made the position of the military known just as he warned the army commanders that there would be “no room for disloyalty amongst all officers and soldiers of the Nigerian Army.”

He spoke at a meeting with Principal Staff Officers of the army, General Officers Commanding and Field Commanders on Monday in Abuja.

A statement by the Acting Director, Army Public Relations, Col. Sagir Musa, quoted Buratai as saying, “Right from the onset of ENDSARS protest, the NA (Nigerian Army) has been aware of the grand design by the sponsors of the protests to draw it into the crisis. The plan was to embark on massive propaganda to discredit the military and the government so as to set the people against the NA once it is called out to aid the civil authorities.”

According to him, this prompted the army to issue the initial warning through a press release of its resolve to secure and safeguard the country at all costs.

“Now the detractors alongside their local and international collaborators have mischievously and deliberately misrepresented troops’ efforts to ensure compliance with the curfew imposed by legitimate civil authorities in Lagos and other states.

“These agitators are falsely accusing the NA of being responsible for the activities of the miscreants despite glaring evidence to the contrary. They have continually threatened to report the NA to the International Criminal Court (ICC) and also threatened various forms of sanctions against personnel and their families,” he said.

He charged the PSOs, GOCs, field commanders and other officers and soldiers of the NA not to be afraid of the ICC in carrying out their legitimate duties as stated in the 1999 Constitution and other extant laws, rules and regulations of Nigeria.

Buratai further stated that the officers and soldiers of Nigerian Army “have every right under the Constitution to carry out assigned and legitimate roles of maintaining law and order in aid of civil authorities and other security agencies.”

He ordered that any act of arson or attempt to kill any soldier or security personnel and other law-abiding civilians must be responded to quickly and decisively.

He said, in dealing with any security threat, they must “fully cooperate with personnel of the Nigeria Police Force and other security agencies and must ensure that everyone is in full compliance with imposed curfews and any other extant security instructions in force.”

He alerted to a plan by some unscrupulous elements to acquire arms and ammunition at all costs from security personnel, adding, “No less than 10 AK-47 rifles have been lost to these miscreants in the past two weeks across the country with attendant lost of lives of personnel.”

He charged commanders to nip in the bud this emerging trend and directed them to warn their troops to be alert to internal security matters.

Related Topics:BurataiFeaturednigerian army
Up Next