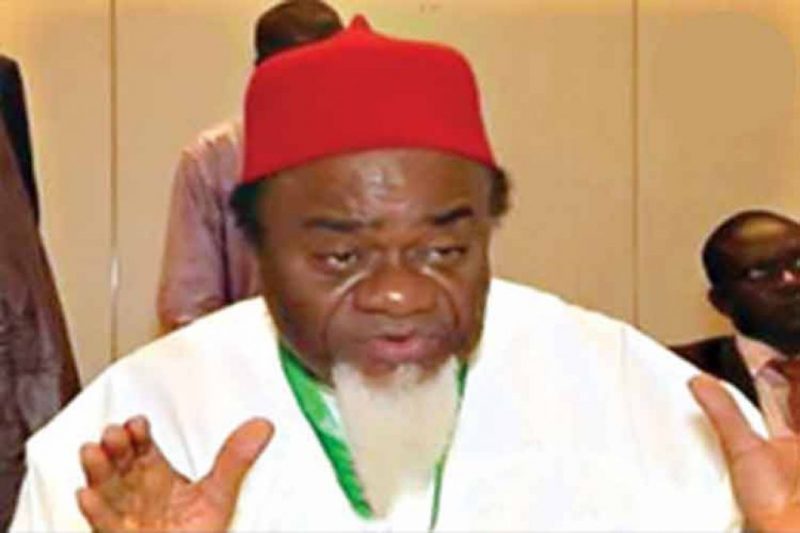 An elder and former governor of Anambra State, Chief Chukwuemeka Ezeife, has expressed disappointment over the position of the President, Major General Muhammadu Buhari (retd.), that the leader of the proscribed Indigenous People of Biafra, Nnamdi Kanu, will not be released from detention.

Kanu was arrested last year in Kenya and brought back to Nigeria before he was charged with offences bordering on treasonable felony and terrorism.

President Buhari had told Igbo elders led by the First Republic parliamentarian and Minister of Aviation, Mbazulike Amaechi, who visited him at the State House, Abuja, that though their request for Kanu’s release was heavy, he (Buhari) would consider it.

The President was, however, categorical in an interview with Channels Television when he said he would not release Kanu and that the IPOB leader should defend himself in court.

Speaking in an interview with Saturday PUNCH on Buhari’s latest stand on the matter, Ezeife said he and his friends were bound to be disappointed, saying the President, by his recent position, rubbished all that happened during the Igbo elders’ visit to the State House in Abuja.

The former governor said, “There is nothing we can do. After the meeting, the people who are familiar with him said he responded to us truthfully and that he took our case very seriously and that his answer gives hope.

“We went away with that, that there is hope. But for him now to, in public, rubbish all that happened, I am bound to be disappointed and so would be my friends who were there.”

On the way forward, he urged the President to work out an agreement with all groups involved in the current agitation for self-determination with a view to establishing a political arrangement that would satisfy Nigerians.

“One thing we can still do is this, Nnamdi is detained, Igboho was put in a crisis position, the South attacked and some people were killed, so many other complaints as well. The Ijaw people are complaining, the Middle Belt has declared their non-compliance anymore and South-South has been in that shape.

“I think what the President should do is to try to solve all these problems with one committee. If he can assemble maybe five people per zone and let them look at all the reports, including 2014, all the constitutions we have had, the 1963 Constitution and all that, and work out an agreement with all the groups for a Nigeria with political rearrangement that would satisfy other people.

“I don’t want to just say I am very disappointed because I am very much interested in Nigeria surviving. So, I suggest this caucus of knowledgeable people who can work out a new arrangement politically for Nigeria. The political solution is the only one that can solve the problem.

However, in a separate interview with Amaechi, the leader of the Igbo elders’ delegation to Aso Rock, he expressed optimism that the President would not renege on his promise to consider a political solution to Kanu’s matter.

Amaechi said, “Kanu’s situation can be solved either politically or even legally. It can be solved legally by the Attorney General. When I met the President, he told me he would consider my request on Nnamdi Kanu.

“There are many ways to kill a rat. So, I have no reason to doubt the President. People need to trust him because he is not the type of President who talks without knowing what he is saying. He is a highly principled man.

“I don’t think the President has reneged on what he told me. He has so far not. All I know is that discussions are going on. I can’t tell you more than that. We are in contact and I have trust in the President’s words.”