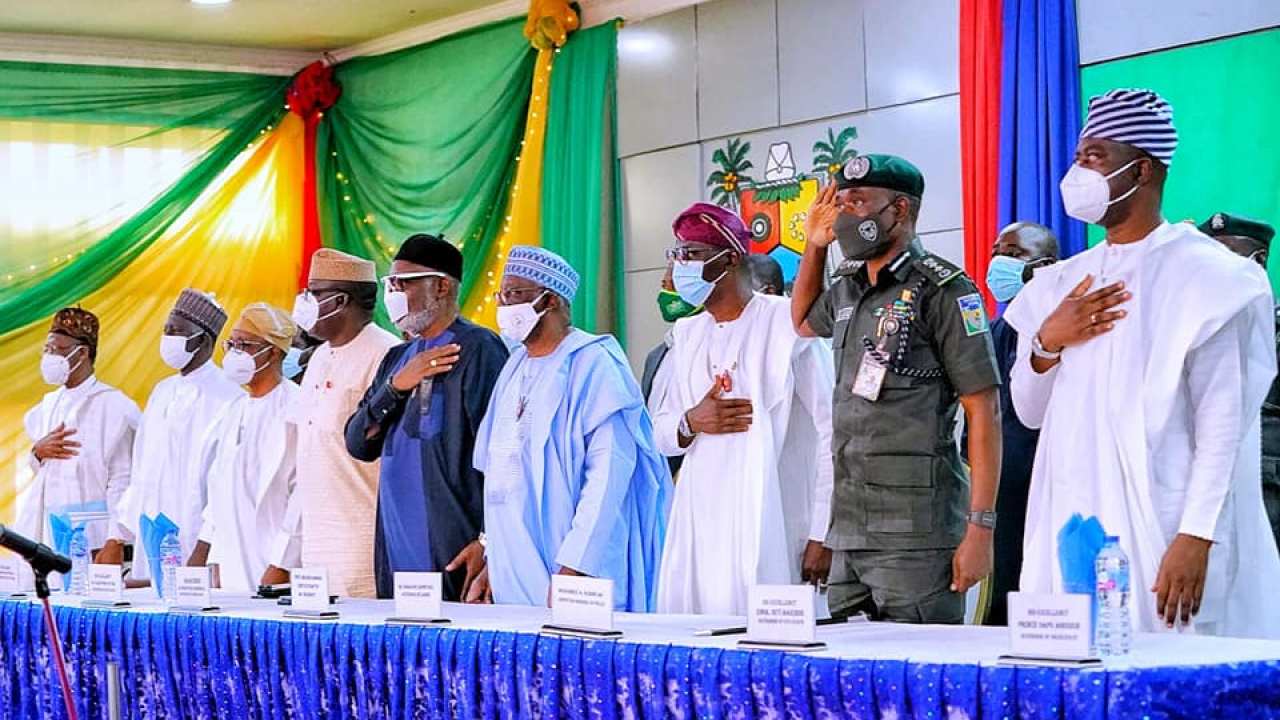 South-West leaders including state governors, traditional rulers and ministers have demanded a review of the nation’s architecture and reports of the 2014 and previous national conferences and adopt relevant recommendations on security and other troubling national issues.

The meeting hosted by Lagos State Government hosted was at the instance of all the six governors of the region, to forge a common front with traditional institutions in addressing the issues that led to the recent nationwide youth protest, which ended in violence.

President Muhammadu Buhari was represented at the event by his Chief of Staff, Prof. Ibrahim Gambari.

Current members of the Federal Executive Council (FEC) from the region and the Inspector General of Police (IGP), Muhammed Adamu, attended the event.

This obviously is the fallout of the threat resulting from the recent destruction of key public and private assets in Lagos and other states in the unrest that followed the #endSARS protests and sought to find the way forward.

The leaders, in a communique issued after the meeting stated and signed on behalf of the participants by Chairman of the South-West governors, Governor Rotimi Akeredolu of Ondo State and Ooni of Ife Oba Enitan Ogunwusi, stated, called for a “review of reports of constitutional conferences including 2014 National Conference and implement some of the recommendations, especially with reference to security, economy and equal treatment for citizens all over the country.”

They stated, “The security architecture of the country requires adjustment to adequately address the threats and realities of insecurity in the country. There should be more police presence in communities in the South west states.

“While there are legitimate concerns contained in the initial ENDSARS movement, these have been hijacked by criminal and other elements with ulterior and negative forces and degenerated into anarchy.

“There is a need to undertake preventive actions aimed at prevention of repeat of what happened in the country following the ENDSARS demonstrators. Security needs to be strengthened in all states.

“We wish to encourage the Nigeria Police by responding to their needs and appeal to them to do more to protect lives and properties and enhance security all over the country.”

They noted that the prolonged closure of the border had caused economic difficulties and sought its review with a view to permitting the resumption of economic and trading activities.

The need to address youth unemployment and empowerment was also raised and demanded a comprehensive programme on this.

“We recognize the damaging and negative impact of fake/false news and worry about its destructive and dangerous potency of fake news. We call on Federal Government to use the instrumentality of existing laws and those regulations bench-marked from other countries to provide safeguards against the spread of fake news. 2015 Cyber Act will also be fully used.

On the prolonged faceoff between the FG and university lecturers, the leaders called for urgent resolution of the crisis so that students could return to school in earnest.

They also “endorse the call by traditional rulers call for regular consultations with state governors and federal authorities on challenges facing the state and for appropriate recognition of their role in the constitution.”

Earlier at the meeting, President Buhari, who spoke through Professor Gambari, had said the political class must go beyond the lip service and equip the young people with skills that would make them competitive in market.

He said, “Our government’s efforts are emerging from multiple levels. The vice president and governors are designing an engagement framework through the National Economic Council that will be rolled out across states of the federation.

“Chief among them is police reform across all its dimensions; community policing as an additional layer that can resolve some of our security issues.”

Also at the forum are the Olubadan of Ibadanland, Oba Saliu Adetunji; the Ayangburen of Ikorodu, Oba Kabiru Sotobi; the Olowo of Owo, Oba Olateru Olagbegi; the Orangun of Oke-Ila, Oba Adedokun Abolarin, among others.

Related Topics:FeaturedSouth-West leaders
Up Next

Alleged forgery: Why we can’t disqualify Obaseki by INEC