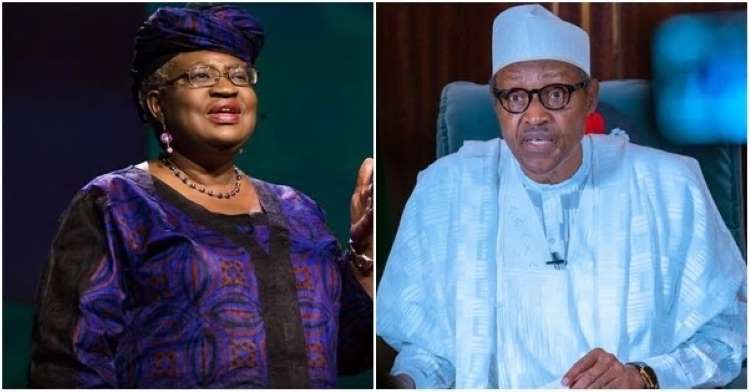 The European Council has expressed its continued support for Dr. Ngozi Okonjo-Iweala in her bid to become the next director-general of the World Trade Organisation.

President of the European Council, Mr Charles Michel, reiterated the council’s support in a video conference held with President Muhammadu Buhari on Friday.

A statement issued by the Special Adviser to the President (Media & Publicity), Femi Adesina, stated this on Friday.

This came as the Minister of State for Industry, Trade and Investment, who doubles as the Chairperson of the Campaign Strategy Team for Okonjo-Iweala, Amb. Mariam Katagum, said Friday at an emergency virtual meeting that she convened that Nigeria had reached out to the United State, the main opposotion to the emergence of Okonjo-Iweala as WTO’s DG.

The President is leading Nigeria’s charge for Okonjo-Iweala, the country’s former Minister of Finance, to emerge as the first black and female WTO DG. But the bid has been opposed by the United States.

Buhari thanked the European Council for its support for Nigeria’s candidate.

The minister at her conference said, “Nigeria is currently reaching out to all members of the WTO including the United States of America and South Korea to overcome the impasse as well as persuade the United States to join the consensus in adopting the recommendation of the appointment of Dr. Ngozi Okonjo-Iweala as DG-WTO.”

A key group of the WTO ambassadors had proposed Okonjo-Iweala to lead the trade organisation on Wednesday, expected to clear the way for her to emerge the first African to head the global watchdog in its 25-year history.

The candidacy of the former World Bank director had received a boost last Monday when the 27-member states of the European Union backed her for the job.

Okonjo-Iweala had also won the goodwill of a group of Caribbean and Pacific States as well as others from Asia.

The US representative at the special WTO Head of Delegations’ meeting in Geneva was the only strong opposition to Okonjo-Iweala’s confirmation after the last round of consultations with member-countries.

The US faulted the outcome of the consultations, despite that all other member-countries present were unanimous in their insistence the rules were transparent.

The US government said it opted to root for the Korean Trade Minister as the next WTO director-general because of her credentials as a trade expert, who has distinguished herself as a successful trade negotiator and trade policymaker.

Other issues discussed during the conference with Buhari are debt relief for Africa, EU-African relations and recharge of the Lake Chad.

The Lake Chad has shrunk to less than one-third of its usual size, thus throwing about 130 million people that depend on it into dire straits.

Recharge of the Lake Chad is an issue the Nigerian President has vigorously canvassed at diverse global forums, according to the statement.

Buhari expressed appreciation to Michel for the expected positive developments on the issues.